″Made in China″ Label Hugely Popular in Germany | Business | Economy and finance news from a German perspective | DW | 24.10.2007

"Made in China" Label Hugely Popular in Germany

New statistics show that China has overtaken the US and Britain to become the third largest exporter to Germany with clothes, shoes and electronic products topping the list. 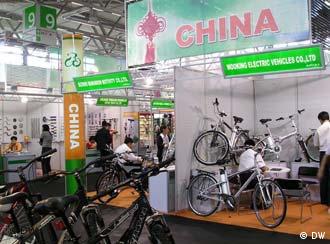 Chinese products are in high demand in Germany

The Federal Statistics Office in Wiesbaden on Wednesday, Oct 22, released figures underscoring China's hugely growing importance for Germany as the Asian powerhouse edged out the US and Britain to become the third largest exporter to Europe's largest economy.

Last year, Chinese goods worth 48.8 billion euros amounted to 6.7 percent of all products imported into Germany. Only France and the Netherlands exported more to Germany in the same period. Until ten years ago, Chinese exports made up just 2.6 percent of overall exports to Germany, according to statistics.

German consumers' appetite for all things made in China is especially evident in clothing, shoes, toys and electronic products, the figures showed. 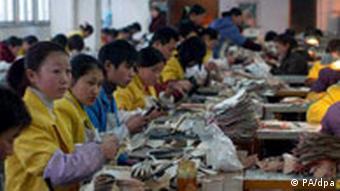 Last year, a fourth of all imported textiles came from China while leather goods such as shoes made up 29 percent. Notwithstanding the recent scares surrounding Chinese-made toys, last year 60 percent of all toys and games imported into the country by German companies originated in Chinese factories.

The same trend is underway in the high-tech electronics market, statisticians said. Since 1996, gadgets made in China are increasingly popular in Germany with television sets, radios and mobile telephones and other consumer electronics heading the list. Statisticians said computers made in China are also increasingly breaking into the German market.

It's estimated that every third computer sold in Germany is manufactured in China.

The flood of goods from China to Germany seems however to be a one-way flow.

The Asian country is also rated number 11 when it comes to importing German goods. Last year, Germany exported products worth 27.5 billion euros to China. However, the figures don't include German cars, for instance, that are assembled in China.

EU officials said the bloc's trade relationship with China is "deeply unequal" and have urged Beijing to take action on resolving currency disputes and dismantling barriers for European imports. (17.10.2007)

German Chancellor Angela Merkel is seeking better business ties with China while on tour there. But while German companies are also broadening production on the Asian giant's market, product safety concerns abound. (29.08.2007)

The European Union's top consumer affairs official is flying to Beijing on Saturday following a host of concerns about the safety of products imported from China. (21.07.2007)

Does the "Made in China" brand inspire confidence in you? Please include your full name and country with any reply.