A 24 hour stand-off between Macedonian police and gunmen over the weekend left 22 people dead. Questions remain about the motives and many observers doubt the official version. DW's Boris Georgievski reports. 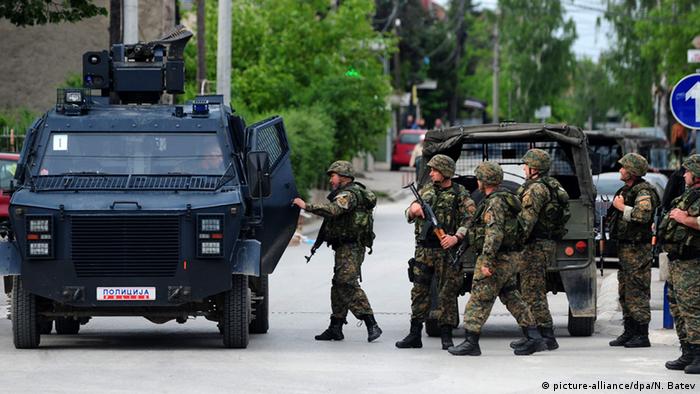 "Divo naselje," a mainly Albanian neighborhood in the northern Macedonian town of Kumanovo looks like a war zone, one day after violent clashes between Macedonian security forces and an armed group claimed 22 lives.

"Police have prevented coordinated terrorist attacks at different locations in the country that would cause serious destabilization, chaos and fear," President George Ivanov said after an emergency meeting of Macedonia's National Security Council on Sunday in the capital Skopje.

Hundreds of residents had to flee their homes reminiscent of the scenes from the civil unrest between Macedonian security forces and Albanian guerrillas in 2001, which ended with a peace agreement granting the Albanian community greater rights.

Returning to their homes residents encountered streets stained with blood and bullet-riddled walls. At least 10 houses are said to have been damaged beyond repair. The government has promised it will repair all the material damage. What worries the citizens of Macedonia much more, however, is the damage done to the local community and inter-ethnic relations between Macedonians and the Albanian minority, which comprises about a quarter of the Balkan country's two million population. 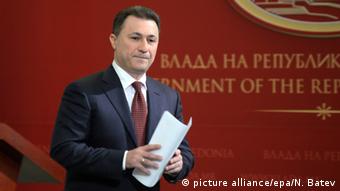 Prime Minister Gruevski said some of those killed came from abroad

A lot of question marks still hover over the incident that happened over the weekend and its timing. The motives of the alleged terrorist group just one of them.

“We still don't know who stands behind this paramilitary formation. We don't know who organized them”, Pavle Trajanov, a former minister of the interior and membefr of parliament from the ruling coalition, told local media. “Until now, we haven't seen their cause, there is no statement from someone taking responsibility for the attack”, Trajanov said.

Statements by leading politicians have only added fuel to the speculation. Prime Minister Gruevski and the ministry of police told the media that the armed group consisted of domestic and foreign nationals, suggesting that some of those killed or arrested in Kumanovo had fought "in the Middle East". President Ivanov added that the Macedonian security apparatus knew about the existence of this group since “early 2015.”

Some experts openly question the suggestion of a dangerous terrorist group wandering around the country for months, and eventually barricading itself in the city.

“If the Macedonian police had known that the group had entered the country, it means that they were followed and allowed to station themselves in the second biggest city in the country. Is this normal police tactics?” wondered Dragi Raskovski, a professor of law at the Cyril and Methodius Universtiy (UKIM) in Skopje.

Prime minister Nikola Gruevski speaking in a live televised address after police declared the operation over, denied such claims. 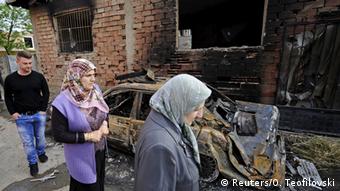 Residents returned to rubble and burned out vehicles

"Macedonian police have performed the most complicated operation and the police forces, with officers from all ethnic groups, have performed a professional, heroic and patriotic operation," Gruevski said.

Since early this year his nine-year hold on power has been threatened by allegations of illegal wire-tapping and abuse of power leveled by opposition leader Zoran Zaev.

Zaev says there is evidence that over 20,000 people were wiretapped as part of a system that he claims reveals widespread corruption and abuse of power by the governing VMRO-DPMNE party. Gruevski denies those allegations. He says the wiretaps were the work of unspecified foreign spies and has accused Zaev of using the allegations to plot a coup.

The state prosecutors, meanwhile, charged Zaev and four others with alleged involvement in the wiretapping scandal. Zoran Zaev's Social Democrat party responded by accusing the government of manipulating the judiciary.

Then, on Tuesday, May 5, Zaev published a new set of audio files and accused Gruevski and his interior minister of attempting to cover up the death of a 22-year-old man, who was beaten to death by a police officer during a post-election celebration in 2011.

These revelations provoked huge demonstrations in Skopje where up to 2,000 protesters clashed with Macedonian police outside a government building, as they called for the resignation of the prime minister and his government. 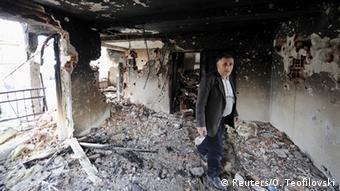 There wasn't much left of this home after the stand-off

The demonstrations went on for days, organized mainly through social media, but they stopped after the police action in Kumanovo.

The Russian foreign ministry, on the other hand, declared its support for the government, accusing the opposition and "Western-inspired" NGOs of trying to destabilize the country.

"The choice of many opposition movements and NGOs, inspired by the West, that favor the logic of the street and the known scenario of a 'colored revolution', is full of dangerous consequences," a Russian government spokesman said.

Moscow's message follows the line of the Gruevski government, which accuses the Social Democrats of collaboration with unnamed "foreign secret services" to destabilize Macedonia. The ruling party has repeatedly accused some NGOs and named activists in them of working for foreign interests. 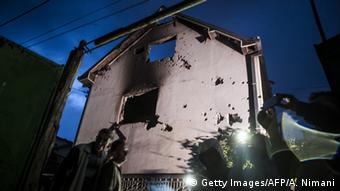 Many buildings were pock-marked with bullet holes

In his statement after the meeting of the National Security Council President Ivanov urged EU and NATO to "find a way to unblock Euro-Atlantic integration for the sake of both Macedonia and the entire region."

But many in the country, including the opposition Social Democrats say that the first step should be the resignation of the whole government and new elections organized by an interim government.

The first step by the opposition towards that goal is a big anti-government rally scheduled for May 17. Opposition leader Zoran Zaev said last week “they won't stop until the government resigns”.

Franz-Lothar Altmann, a German expert on Eastern Europe at the University of Bucharest, has called on the EU and Germany to urge the government in Skopje to enter unconditional talks with the opposition.

“Otherwise, Macedonia´s democracy, weak as it already is, will end up in a national catastrophe”, Altmann warned.

Macedonia is grappling with its deepest political crisis since its independence from the former Yugoslavia. It could turn into a civil war, Eastern Europe expert Franz-Lothar Altmann warns. (11.05.2015)

Security forces have "neutralized" an armed group which planned attacks on a military base and state institutions in Macedonia, officials have said. Several police officers have been killed in the battle. (10.05.2015)

Opposition leader Zaev and four others have been charged over a wiretapping scandal that threatens the ruling party's reign. But with leaks linking the prime minister to widespread corruption, who's to be believed? (01.05.2015)