Müntefering to Step Down as SPD Leader

Franz Müntefering has surprisingly announced that he will not run for re-election as leader of Germany's Social Democratic Party (SPD) in November after losing a key power struggle Monday. 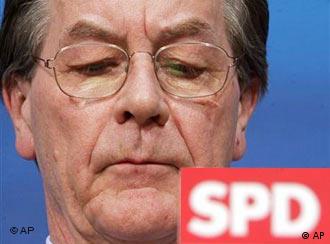 Müntefering's future is up in the air

Müntefering was meant to serve as vice chancellor and labor minister in a grand coalition government with the Christian Democratic Union (CDU), but has now said that he is not sure whether he will do so.

"I left my decision open as to whether I would belong to the cabinet after the next party congress" on November 14-16, Müntefering told reporters.

The decision came after the unofficial leader of the Social Democrat party's left wing, Andrea Nahles, won a vote by the party's board to become the next SPD secretary general, roundly beating Müntefering's hand-picked candidate Kajo Wasserhövel.

Müntefering said that the upset had led him to decide not to run for re-election as the leader of the Social Democrats.

"I can no longer be party chairman under these conditions," he told reporters.

The announcement comes at a critical time in the negotiations on forming a left-right coalition government under Angela Merkel, the CDU leader.

The move could throw into question the timetable for the new government to take office, originally slated for late November. On Nov. 22, Merkel is expected to be voted in as Germany's first female chancellor by the lower house of parliament, two months after her Christian Democrats narrowly beat current Chancellor Gerhard Schröder's Social Democrats in a general election.

Schröder has said he will not serve in the grand coalition government.

The SPD in-fighting came in the midst of coalition talks aimed to create a financial plan for the new government that includes spending cuts and possible tax increases to bring the budget under control.

The power struggle began after Müntefering nominated a loyal deputy, Wasserhövel, to serve as the Social Democrats' secretary general, who is responsible for managing party business and ensuring discipline among its often willful rank-and-file.

But the party leader's "unilateral" move sparked indignation among some factions, leading the unofficial chief of the party's left wing, Nahles, to declare her own candidacy.

The Social Democrats were hoping to snuff out the dispute ahead of Monday evening's coalition talks and before a party congress when the secretary general is to be formally elected.

Although Nahles has won some top-level support for her bid, leading party officials said a victory for her would hobble Müntefering at a crucial time and expose deep fissures in the party.

"I think this approach is pretty scandalous," the spokesman for the Social Democrats' right wing, Johannes Kahrs, said of Nahles. "The party cannot afford, in the middle of coalition negotiations, to have our leader weakened."

As coalition talks continue in Germany on Monday, a leadership struggle is raging within the ranks of the Social Democrats. At issue is who should don the cap of SPD secretary general. (Oct. 31, 2005)