Trying to set themselves apart from an increasing number of discount airlines, officials for Germany's Lufthansa have started a luxury offensive to attract more customers. 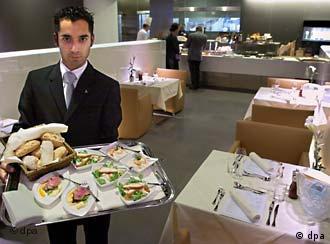 Chauffeurs, champagne and cigars: Are these part of a high-price package which can help traditional airlines hit back at budget operators?

The German airline Lufthansa thinks so.

It believes that well-heeled people will pay for a chauffeur to park their cars, valets to carry suitcases, for a massage and dinner followed by a cigar in luxurious surroundings before boarding.

And how about being driven by Mercedes S-Class or a Porsche Cayenne to the aircraft while the other passengers struggle against wind and rain as they cross the tarmac?

The airline industry is in trouble, crisis some say, owing to years of low profitability, setbacks in the travel industry owing to terrorism and health scares, high fuel prices and particularly the onslaught of cheap flights.

Some airlines, the Irish company Aer Lingus is an example, have decided to fight the budget operators at their own game.

High living at a price

But Lufthansa has invested heavily in the belief that the best way to counter the budget airlines is to offer high living at a high price to high spenders. Instead of going for an offer of low-cost, queue and squeeze, it has opted for the lap of luxury.

The airline is counting on taking the upmarket class a notch higher to win the customers with the money from other airlines. 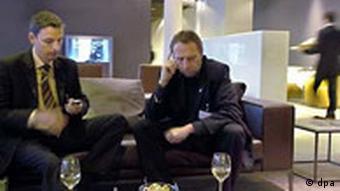 Business people are supposed to relax in Lufthansa's new first class terminal. But will they?

This week it unveiled a spanking new luxury terminal for first-class passengers, which resembles more a five-star hotel than a soulless functional airport.

From Dec. 1, top-paying customers can sit down to a cordon-bleu dinner, choose between 50 of the world's best whiskies at the bar, smoke a cigar in a special lounge or simply freshen up in marble bathrooms before boarding their flight.

There are no crowds, no queuing and no jostling, just 1,800 square meters (19,000 square feet) of luxury amenities at the disposal of about 350 passengers a day.

Lufthansa has invested about €30 million ($39 million) in the first-class terminal in a bid to lure premium customers away from rival airlines.

"We want to create an ambiance that is like travelling in your own private jet," said chairman Wolfgang Mayrhuber.

"It's a service for pop stars and for the lucky few," who can afford to pay €6,200 for a return ticket from Frankfurt to New York or €10,130 for a flight to Tokyo, said BNP Paribas analyst Nick van den Brul. 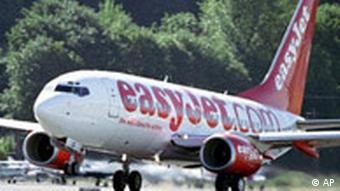 EasyJet lures with cheap flights and no frills.

Analysts said that unlike low-cost or budget airlines, such as Ryanair or Easyjet, which bank on quantity rather than quality to keep costs down, the bigger carriers are likely to differentiate more and more between their classes in future.

A question of class

Lufthansa insists that increased differentiation was the way forward, since it could persuade customers that flying can actually be a pleasurable experience again.

It recently made Internet access available in-flight for business clients and equipped its business class and above with seats that can be pulled out and turned into a bed on long-haul flights.

British Airways already installed such seats four years ago and Iberia has earmarked €100 million to equip 31 of its aircraft with similar seats.

Virgin set a new style in the early 1990s, offering extras such as the possibility of being measured for a suit on a flight out to Asia. The garment would be available shortly after arrival. 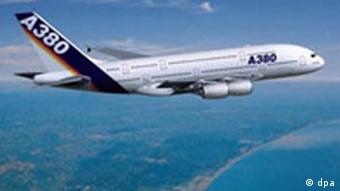 Analysts now say that the campaign to use ever more luxurious and sophisticated services to lure wealthy customers was likely to receive a boost when Airbus's new superjumbo, the A380, starts being used on commercial flights.

Nevertheless, five-star treatment has its limits and first-class passengers are just as likely to find their flights delayed as their lowly counterparts in economy class, even if, at least in Lufthansa's new terminal, the waiting for those lucky few could be in pampered comfort.

Putting the Brakes on Budget Airlines?

German politicians who focus on environmental issues have accused the popular no-frills airlines of dumping prices to attract passengers, all to the detriment of the environment. They want ticket prices to go up. (Sept. 15, 2003)

Cell phone emissions may not be as bad for on-board electronics as regulators once thought, according to Lufthansa officials, who conducted tests on the issue. But government officials are not convinced. (Aug. 6, 2004)

German airline Lufthansa and 21 other carriers will start charging passengers new service fees this autumn. The charges apply to tickets bought on the Internet, at ticket counters and travel agents. (Aug. 16, 2004)