Germany's Lufthansa has said it has taken legal action to head off a strike by domestic air traffic controllers next week. The latter said they wanted to support European colleagues protesting an EU reform initiative. 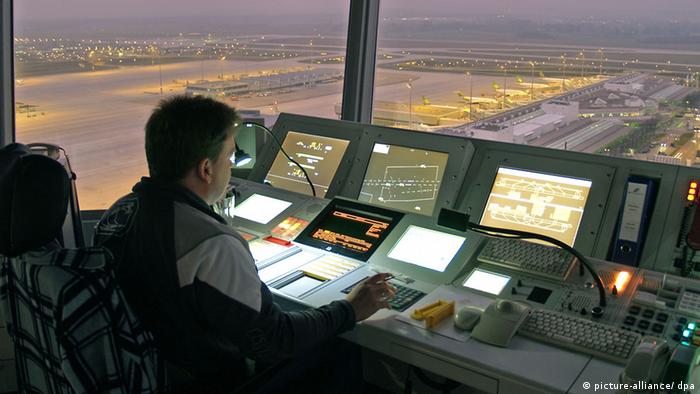 German flagship carrier Lufthansa confirmed Friday it had asked for an injunction at a regional labor court in Munich to prevent a planned one-hour strike by domestic air traffic controllers next Wednesday.

Flight controllers said their industrial action would have the purpose of providing moral support for colleagues on strike in several other European nations, with French air traffic controllers set to stage a one-day work stoppage next week.

"From our point of view the strike called by the flight controllers' union here is of a purely political nature and hence not in line with the law," Lufthansa commented.

The airline thus joined the German Air Navigation Services Organization (DFS) which had also asked for an injunction at another regional labor court which was to rule on it on Monday.

DFS officials feared even a one-hour strike could lead to the cancellation of up to 600 flights as no planes were allowed to take off or land without air traffic controllers on duty.

Flight controllers across the EU have been protesting the bloc's Single European Sky initiative which Brussels said would centralize the continent's airspace and reduce congestion and inefficiencies costing airlines an estimated 5 billion euros ($6.6 billion) annually.

But many workers fear the reforms will lead to more difficult working conditions and job cuts.