Love Potion Works -- Or Your Money Back!

A jilted lover decided to use supernatural means to get her man back. But when the love potion she bought from a witch didn't work, she demanded her money back. She got it. 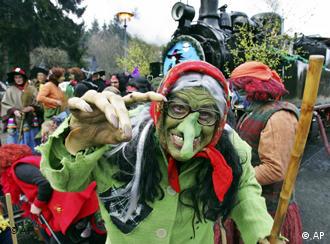 She'll have to guarantee her work in the future

When a lover leaves, the person left behind can sometimes resort to drastic measures. One German woman in just such a situation didn't take the stalking route or throw herself off a cliff. She went to a self-professed "love witch," who she hired to use magical means to force her ex to change his mind.

The heartbroken woman paid 1,000 euros ($1,270) for a love potion, which involved a ritual carried out over several months during the full moon.

However, her former lover's heart remained cold as a stone. The potion, it seems, fizzled.

The spurned woman demanded the witch return her investment. When the sorceress refused, her client took her to court.

Sounds like a no-brainer. Everyone knows the quotation falsely ascribed to P.T. Barnum, "There's a sucker born every minute."

But a court in Munich thought otherwise. The judges, using all those years of rigorous legal training, ruled that a love position is an "objectively impossible service," adding that a magic ritual is "not suitable for influencing people from a distance."

For that reason, the court ruled, the woman who hired the conjurer is entitled to her money back, never mind the jilted woman hired the witch specifically for her alleged magical prowess and entered into the commercial agreement voluntarily.

One has to wonder if the ruling sets a dangerous precedent. Are we about to see an avalanche of lawsuits by struggling, lonely individuals against astrologers and tarot card readers who told them at one point that love and money were just around the corner?

The healing powers of homeopathy, the legitimacy of gay marriage and the sinister influence of fledgling wizard Harry Potter were on readers' minds in recent weeks. (11.05.2005)

Culturally speaking, the New Year period is usually reserved for mainstream family entertainment. But not this year it seems as a chilling new production of "Hansel and Gretel" gets set to open at a German theater. (07.01.2005)