Los Angeles to host 2028 Olympics, leaving the 2024 games for Paris

Authorities confirmed rumors that have been circulating for weeks: LA will take the 2028 games and Paris the 2024. The deal means Paris will likely host the games on the 100th anniversary of its 1924 games. 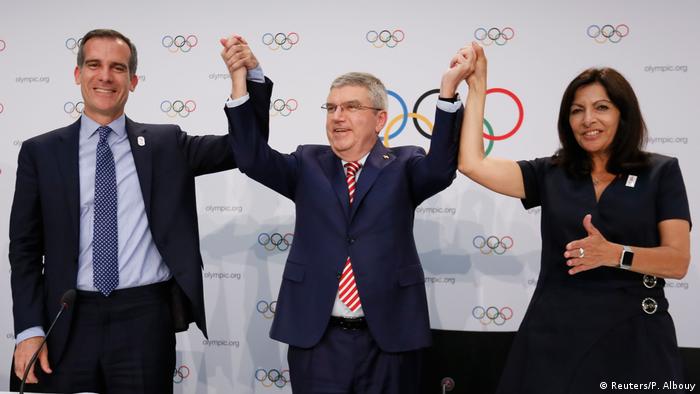 The city of Los Angeles (LA) has agreed to let Paris host the 2024 Olympic Games in exchange for the 2028 event, the International Olympic Committee (IOC) and city authorities announced on Monday.

The two cities had both been vying for the 2024 games but three weeks ago the IOC announced it was looking to decide the hosts of both the 2024 and the 2028 games in one session.

"The IOC welcomes this decision of the Los Angeles Olympic and Paralympic Candidature Committee, and we are pleased to release the Host City contract 2028 in a transparent and timely manner," IOC President Thomas Bach said in a statement.

Paris had been particularly keen on hosting the 2024 games as it would be the centenary of the 1924 Paris Summer Games. The decision to award the 2028 games to LA all but guarantees the Paris bid.

The agreement was labelled by multiple parties as a "win-win-win" situation.

Read more: Why does nobody want to host the Olympics anymore?

The co-chair for Paris' Olympics bid, Tony Estanguet, said they had convinced the IOC "of the merits of awarding" it the 2024 Games but did not say a final decision had been made.

Paris Mayor Anne Hidalgo said she was happy that her LA counterpart had agreed on the deal, in a French language post on Twitter.

The next Olympic Summer Games will held in Tokyo in 2020.

The decision to grant Paris the 2024 games will throw focus on its security arrangements following a string of terror attacks in the city. LA on the other hand will now have an additional four years to iron out transport issues.