Long-term space missions are about more than setting records

US astronaut Scott Kelly and his Russian colleague Mikhail Kornienko are returning from the ISS after almost one year in space. But besides setting a record, their mission brings with it extremely valuable data. 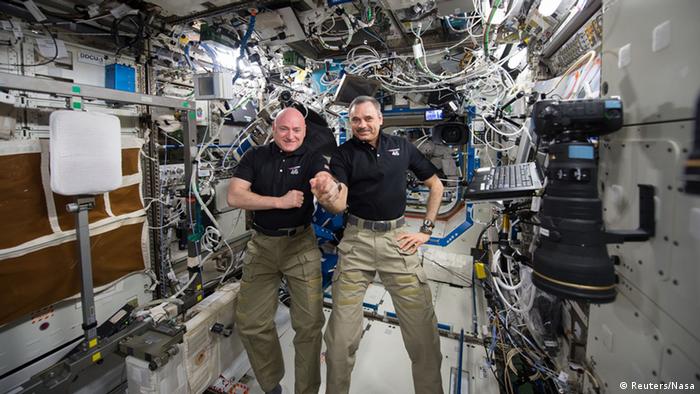 It was on March 27, 2015, when US astronaut Scott Kelly and Russian cosmonaut Mikhail Kornienko boarded Sojuz TMA-16M en route to the International Space Station (ISS). They got there in just six hours. By then, it was March 28 at precisely 01:33 UTC. Since then, the clock has been ticking, by now in record fashion.

If everything goes according to plan, the two will return to earth after more than 340 days in space. In the night from Tuesday to Wednesday, they will close the hatch of the space ship. Then it will be Wednesday, 3:40 am in Kasakhstan, that is to say Tuesday 9:40 p.m. UTC, and in the NASA mission control center in Houston at 4:40 pm.

Another American-Russian duo also set the previous long-term-record aboard the ISS. Michail Tyurin and Michael Lopez-Alegria spent 215 days there between 2006 and 2007. But there were four Soviet and Russian cosmonauts who were longer in space than either of the ISS crews, including Kelly and Kornienko. The Russian Valeri Polyakow holds the world record with 437 days aboard the space station Mir. The three others are Sergey Avdeyev, Vladimir Titov and Musa Manarov.

There is something new about the current long-term mission, however; something that medical researchers usually can only dream about: They have a virtually perfect control group for one of the two astronauts down here on earth. Scott Kelly has an identical twin brother. Mark Kelley is also an astronaut and participated as a Space Shuttle pilot in four ISS missions. 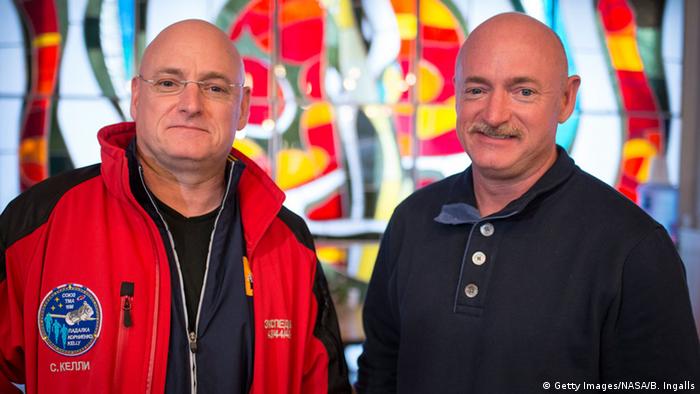 The twins will receive identical medical checks following Scott's mission, just as they did before it got underway. This will help researchers understand how the body and the organs react to zero gravity and to the special conditions in space. And the doctors will take a look at the entire body.

The research is not only designed to understand the effects of long-term missions, for instance, future missions to Mars. It is also likely to bring insights into medical processes that have very practical implications for doctors and patients right here on earth.

A look ahead - into the sky

Mercury will pass right in front of the sun. Two spacecraft will reach their planets. Hobby astronomers will be rewarded with a total and a partial solar eclipse. Only the moon will disappoint in 2016... (30.12.2015)

Bedridden for 60 days in the name of science

Wednesday is the start of a most unusual study at the German Aerospace Center. For two months straight, test subjects will be forced to lie in bed to simulate space travel. And we swear - they are doing this voluntarily! (09.09.2015)

Chicago scientists learn how to make concrete on Mars

Researchers from Chicago's Northwestern University have brought humanity one step closer to the goal of colonizing Mars. They have found a way to make a substance similar to concrete using materials found on the planet. (28.02.2016)

NASA is planning a manned mission to Mars, but first they must figure out how astronauts can grow their own food on the trip and on the red planet. Now a team of Norwegian scientists are closer to solving the problem. (13.01.2016)

It has been more than four years since the last time NASA put out a recruitment call for more astronauts. A two-month application period will start during mid December. (04.11.2015)

Changes in the bone tissue

Spending a long time in space triggers bone loss, along with demineralization of the bones. The bones are getting brittle and the inner substance gets weaker. That means - after returning to earth the danger of fractures is increased.

Women suffer from similar symptoms after menopause. If the bone loss goes untreated, they can lose as much as one percent of bone mass over a period of just one year. In astronauts, this danger is even higher - here it can happen within a month. The most severe points of bone loss are at the hip, the knee-joints, the upper legs and the backbone.

This can be countered to a limited extent by targeting nutrition. However, experience has shown that astronauts generally tend to eat less than people living on earth. Astronauts usually lose weight - up to five percent during a space mission.

If you've ever broken an arm or leg, you'll be aware of this effect. When the cast is taken off, the arm or leg in question has no power anymore. Every move has to be learned again and the muscles trained for weeks to gain strength. This also happens to astronauts on long-term missions. After only two weeks, the muscle mass can go down by one third.

Due to the lack of gravitation, just those parts of the muscles are affected by the deterioration that enable us to walk upright, to sit and to stand. On earth, doctors simulate the effects of zero gravity by having patients spend time in bed for weeks or month with their mattresses slightly lowered towards the head end. This has a similar medical effect.

To work against the muscle deterioration, the astronauts have to maintain a rigid daily training program aboard the ISS: at least two hours of training on a treadmill or other training devices. Otherwise, they could lose as much as 40 percent of their muscle mass over the course of one long-term space mission.

Outside space travel, the research can help find therapies or treatments for bedridden patients or against various forms of muscle dystrophy. 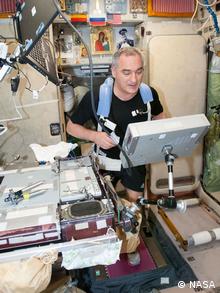 If astronauts were to sit back and relax while aboard the ISS, they would lose mass and muscle

In zero gravity, the body is less able to work against challenging forces. Therefore, also the heart and circulatory system have an easier time - one may think. However, less strain on the heart also means that less blood is being circulated through the body, delivering less oxygen to the muscles and organs. In previous cases, astronauts often showed cardiac arrhythmia - even though they were medically in good shape.

In zero gravity, more blood will flow into the upper body and toward the head. The body reacts to that by producing less fresh blood. When the astronauts return to earth, they usually suffer from low blood pressure for some time. Some even faint right after their return.

For medical researchers, the connections between blood pressure and gravitation are of particularly high interest - including the molecular processes that are going on inside the cells. In space flights, the connection between salt intake and high blood pressure could be proven. This led to the development of a whole new field of research.

It is known from previous space flights that the human immune defenses are changing in zero gravity. For example, a latent infection with a herpes virus may suddenly break out in space.

Also, doctors could show that the number of immune cells in the blood changed before and after a space mission. Shortly after the return to earth, the values go back to normal.

How does a human regain his balance?

Countless nerves are feeding their information to the brain - eyes, the organ of equilibrium in the ears, the senses of touch and nerve cells in the muscles. If a human is subjected to zero gravity, all the information being fed to the brain from those and other sources will get confused.

Using electroencephalography and other forms of diagnostics, medics are researching what exactly is going on in the brain when the human body is adapting to the new conditions - first zero-gravity and then - after return - gravity again.

What does radiation do to the body

On earth, the atmosphere shields us from cosmic rays and solar particles. On the ISS, the protection is rather limited. Only the thin walls of the space station keep some of the radiation out. It cannot keep out all forms of ionizing radiation - such as gamma or x-rays.

In addition, sun-spots - also known as coronal mass ejections - are bombarding the ISS with tiny particles - like penetrating protons.

This leads to increased medical risks for astronauts, i.e., higher cancer risks, effects on the central nervous system and changes in the genetic substance. 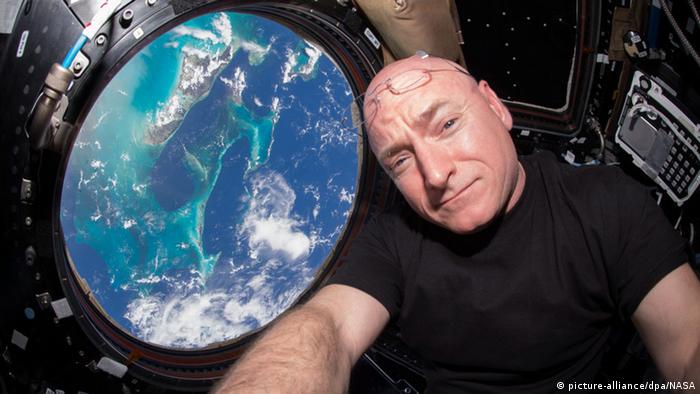 Not only the absence of gravity and physical conditions have an effect on the astronauts. At least as important for the medical well-being are the space conditions on the ISS or in a space ship, the work-load and the mood and good spirit among colleagues aboard the station.

Lack of sleep can trigger measurable changes with regard to one's medical condition. This can be a result of the noisy technical surrounding on the space station. The fact that astronauts are only breathing air from an air conditioner and have no regular day and night cycles can also adversely affect their health.

Usually, astronauts sleep less than six hours per day - which can weaken their working capacity. However, largely due to the strict selection of candidates, there has never been a case of nervous breakdowns or psychiatric disturbances aboard a space station or spacecraft.

However, there have been experiences on previous space flight that have showed that good leadership is vital. If the team does not discuss even minor disturbances openly, the mood aboard the ship can be spoiled right from the beginning. Anger and disagreement can then accumulate - not good in a claustrophobic environment.