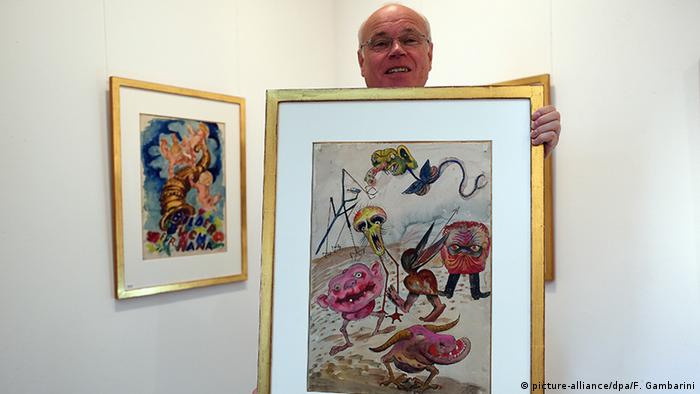 The previously unknown picture book of the painter Otto Dix (1891-1969) includes 14 colorful watercolors depicting known legends and stories from the Bible. It is titled "Picture Book for Hana" and was made around the year 1925.

The 14 watercolors will be exhibited to the public from Tuesday (06.09.2016) in the Düsseldorf gallery Remmert and Barth. Starting next February, they can then be seen in a large Dix exhibition in North Rhine-Westphalia.

Otto Dix's other artistic side

Dix, a critical artist and representative of the "New Objectivity," realistically depicted the dark side of cities and cynically portrayed the society of the Weimar period. He also recorded his personal experience of World War I through apocalyptic scenes.

However, Dix also had another artistic side. The painter loved children and drew bizarre animal images for them. He created six picture books.

The "Picture Book for Hana" belonged to Hana Koch from Upper Bavaria, who died in 2006. She was the daughter of Martha and Hans Koch, a doctor and important art collector in Dusseldorf. His wife Martha, mother of their two children, Martin and Hana, fell in love with Dix and later married him. Hana Koch was about five years old when Dix, an avid Bible reader, gave her the picture book.

The gallery owners Herbert Remmert and Peter Barth had known of the existence of this book for 20 years. Six months ago, their researches led them to Hana Koch's daughter, living in Upper Bavaria, where they finally could hold the treasure in their own hands - a sensational find for art historians.

The "Picture Book for Hana" is the third spectacular discovery in an estate in Upper Bavaria. Early watercolors by Dix were also found there.

The German art collector prominent during a probe into whether an art trove contains works looted during the Nazi era has died. His spokesman said Cornelius Gurlitt died in his Munich apartment after a heart operation. (06.05.2014)