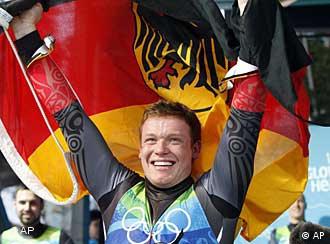 The 20-year-old became the youngest ever Olympic champion for the event, finishing his series of runs in 3 minutes, 13.085 seconds.

He finished 0.679 seconds ahead of German teammate David Moeller who picked up a silver medal. Loch, a police officer, said that taking part had been "enormous fun."

"The last two days have been simply awesome," he said. "I will need two or three hours to realize what's happened. I knew I had a good run but this is unbelievable." 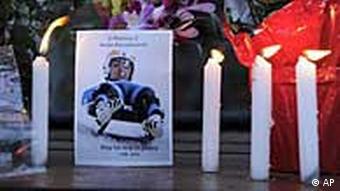 Changes were made after the death of Georgian luger Nodar Kumaritashvili

Referring to the fatal high-speed training accident that killed Georgia's Nodar Kumaritashvili on Friday, two-time world champion Loch said that a decision to shorten the course had been correct. "What happened was very hard for all of us," he added.

Sablikova referred to the German as "a great skater in the 3,000," adding that Beckert would most likely be her main rival for the 5,000-meter event, the final of which will be held February 24.

Germany’s world champion biathlon star Magdalena Neuner was content to pick up a silver medal after a narrow defeat at the Winter Olympics. The country’s other female biathlon hopefuls did not fare nearly so well. (14.02.2010)

Luge in Winter Olympics to continue, despite fatality

The international luge federation has decided the event will continue at the Winter Olympics in Vancouver, after Georgian competitor Nodar Kumaritashvili died in a training accident. The track, however, is to be changed. (13.02.2010)

Germany looking to realize its full Olympic potential in Vancouver