With Germany's most profligate bishop now in Rome, where his fate will be decided by Pope Francis, the faithful remain behind in Limburg. The mood at the bishop's residence is tense, to say the least. 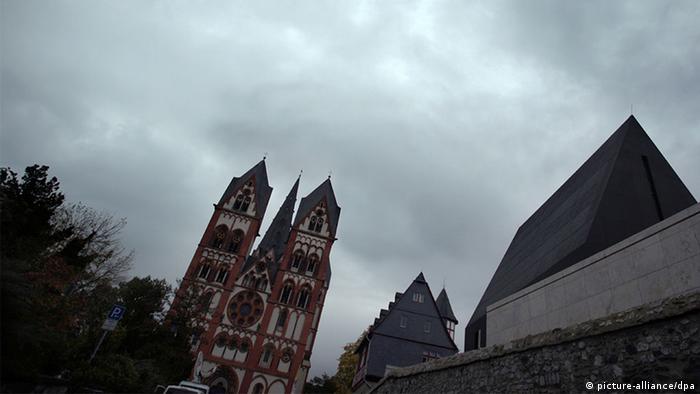 The clouds hang low over Limburg cathedral. In the city of 34,000, the air is still. Like every other day, tourists march up the winding paved road. Cameras click. But these lenses zoom in - not on the seven towers of the late-romantic gothic cathedral that lords so magisterially over Limburg's old town - but on the bishop's new home there. Construction costs are said to have swallowed 31 million euros ($42 million). 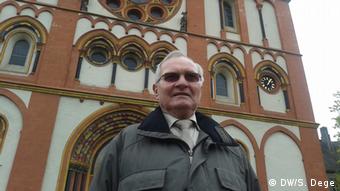 Ortwin Schäfer is appalled by the lack of financial oversight

"Unimaginable," is how Ortwin Schäfer describes it. The pensioner hails from Lebach, a small German city two hours' drive from Limburg. A parish board member for 28 years, Schäfer watched over his Catholic community's finances - and never experienced anything remotely close to the events in Limburg.

"We had to pinch every penny," he tells DW. "That's a slap in the face to a common man. What a waste. I think it's just atrocious."

The pensioner also wonders where the money came from. The biggest chunk of change is supposed to have come from the Episcopal See's private holdings, over which the bishop has sole authority.

"That [policy] has to be changed at the highest levels," Schäfer said.

Happy laughter drifts over. In front of the rolling steel gate of the bishop's residence - closed, of course - Elvira Löhr and Jutta Hetzel line up. A friend snaps a photo for the family album. 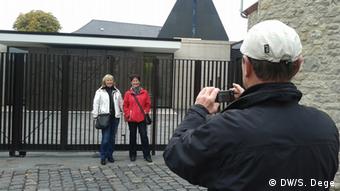 Smiling for the camera - but for the wrong reason

"Some people are already finding it difficult to pay church taxes," Löhr tells DW - a reference to an optional monthly tax dating back to the Weimar Republic. "When someone just burns money like this, then I can understand if people leave the church."

What he doesn't know is that, on Thursday alone (10.10.2013), 20 Catholics turned their backs on the Church, according to figures from the Limburg district court. Typically, one leaves every second day.

For Christian Zimmer, who's sitting on a short wall at the base of the Limburg cathedral, the decision to leave the Church happened long ago. In front of him, and in a stroller, his baby sleeps. Should the bishop step down? The young man laughs.

"If it comes to that, it makes sense," he tells DW. "If the church is supposed to be credible, then that would be the right step!" He adds that for people involved in the church and who represent Christian values, then humility - and not debauchery - is needed. "Hopefully," he adds with a wry smile, "he flies first class," referring to another scandalous event: the bishop's alleged and extravagant trip to India. 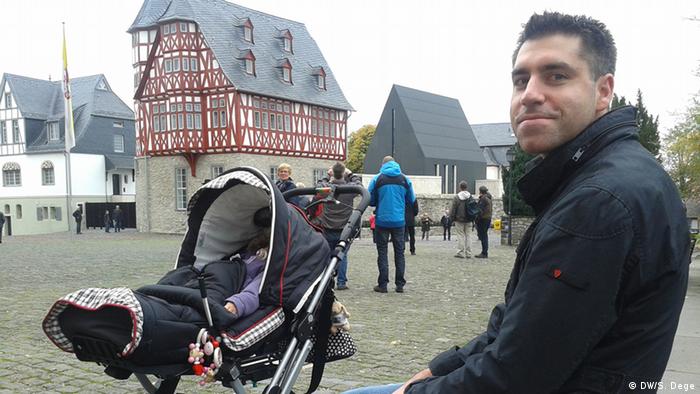 Bishop Tebartz-van Elst flew to Rome Sunday for high-level talks at the Vatican. In a letter to the faithful made public over the weekend, the 53-year-old wrote that he would refrain from public worship.

Archbishop Robert Zollitsch, head of Germany's Bishops Conference, is also expected in Rome on Monday. Zollitsch had previously kept his distance from Tebartz-van Elst. He can "understand well the disappointment of the people in the bishopric of Limburg," he said. 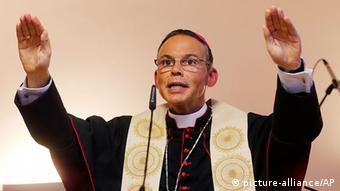 Beyond the cost overruns on the bishop's residence, Tebartz-van Elst also stands accused of false testimony in a Hamburg court regarding the alleged first-class flight taken to India. Increasingly, representatives of the Catholic Church are calling on the bishop to step down. In a German newspaper, the President of the Central Committee of German Catholics, Alois Glück, called Tebartz-van Elst a "liability for the Catholic Church."

A small plane flies over the Limburg cathedral in continuous loops - a television team, most likely, recording a bird's-eye view of the bishop's residence.

Fritz Keil from the city of Halle near Leipzig, is unimpressed. "Preposterous," he says of construction costs on the bishop's residence. Meanwhile, the nearby cathedral, a World Heritage Site, urgently needs renovation.

"A cost increase like that doesn't come as a surprise," Keil tells DW, who works in the construction industry and has experience with construction projects. "If extra work is needed, that's where a foreman should approve," he says. "Supervisory boards should advise: Is that really necessary? Is the money being sensibly invested? Keil feels sorry for the Catholics of Limburg on the receiving end of the country's scorn. 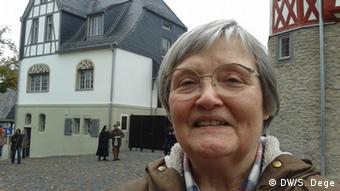 For Heide-Marie Eisenmenger, "building costs" - in the sense of a lost opportunity - are the issue. Her husband calculates that, for the price of the bishop's residence, 60 apartments for the needy could have been built. She's a Limburg native and is deeply disappointed by her Bishop's leadership. Tebartz-Van Elst leads like a prince bishop of medieval times, she tells DW: "I'm at the top - I'm closer to God. And you are in the dust." That, she says, was a mistake.

"We're not subservient anymore. Today, the faithful are confident and aware!" she says.

Still, Eisenmenger does not want to leave the Church. "I no longer have faith in my bishop, but in God. Otherwise, I would've been gone long ago," she said.

In Limburg, all remains quiet. Fresh winds from Pope Francis at the Vatican have yet to arrive in the bishop's city, but Ilona Biegal is waiting for the Catholics' great new hope to lay down the law.

"Pope Francis exemplifies decisiveness," she tells DW. "Now, he has to act; otherwise, he won't be credible."

Bishop of Limburg in trouble and in court

The Bishop of Limburg is embroiled in controversy and has to stand trial for giving false testimony in court.

The threat of an expedited court reprimand, a construction cost scandal, loss of confidence: If the bishop of Limburg does not resign of his own accord, the pope must take decisive action, says Felix Steiner. (11.10.2013)

'Bishop should wait until smoke clears'

The Bishop of Limburg is under criticism for overspending on his new home and for giving a false legal declaration. Church law expert Stephan Haering says things are bad, but he shouldn't resign yet. (10.10.2013)