South Sudan's government claims progress is being made in implementing a peace agreement signed in 2015. But a closer look reveals that many pledges remain unfulfilled. 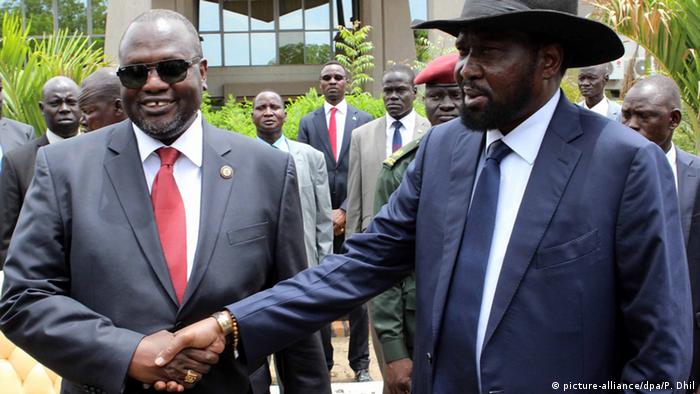 The objective of the peace deal signed in Juba in August 2015 was to restore peace and stability following a bloody conflict that broke out in late 2013, two years after South Sudan obtained independence from the Republic of Sudan.

The conflict initially pitted former Vice President Riek Machar against President Salva Kiir, who accused Machar of plotting a coup against him. The violence took on an ethnic dimension with Machar's Nuer fighting against Kiir's Dinka. Since then, other ethnic groups have been drawn in, spurred by local grievances.

The East African regional bloc, the Intergovernmental Authority on Development (IGAD), which mediated the deal between President Kiir and Machar, recommended a national dialogue, which Juba implemented in May this year.

"The national amendment committee has finalized its work and a constitutional amendment is now underway at the ministry of justice," said Agel Machar, spokesperson for the rebel group, the Sudan People's Liberation Movement in Opposition (SPLM-IO), which is currently in alliance with the government.

First Vice President Taban Deng Gai, leader of the SPLM-IO, is currently implementing parts of the peace deal with the SPLM government led by President Kiir. Machar, who is in exile in South Africa, claims that Gai is not acting on behalf of SPLM/A, the armed wing of the SPLM.

In an exclusive interview with DW, President Kiir said Machar was merely interested in "creating a situation that takes people back to war."

"He is only making confusion, calling his supporters on the phone. He knows where they are hiding and these are the people who are still making problems, continuing to fight and do not want to make peace. He has no spirit of leadership, no spirit of togetherness. He wants people to die every day," Kiir said.

Information Minister Michael Makuei  told DW that the transitional government was fully implementing the peace agreement. Experts, however, believe that the achievements outlined by the government and Taban Deng Gai's faction of the SPLM-IO are more related to power sharing, which in essence benefits both parties. 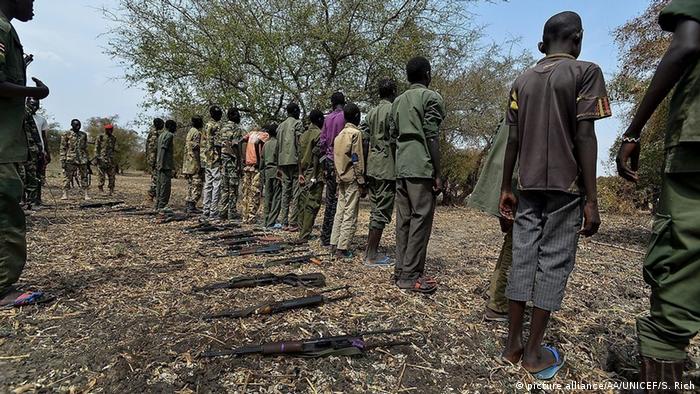 So far, only one of eight chapters of the peace deal has been implemented. Several key provisions are still unfulfilled.

"As JMEC we have remained profoundly shocked by the rampant hostilities across the country and the rapid deterioration of the political, security, humanitarian and economic situation in South Sudan," said Festus Mogae, former president of Botswana.

Mogae is chairman of the body monitoring the implementation of the peace agreement, the Joint Monitoring and Evaluation Commission (JMEC).

A key part of the deal was the holding of general elections and the subsequent integration of rebel forces into a unified government. The agreement also stipulated the formation of an electoral commission seven months after the signing of the deal. Both the government and the opposition were also supposed to merge their forces shortly afterwards. But none of these requirements have been implemented.

Information Minister Makuei says there are challenges hindering the implementation process. "The international community, which pushed for this agreement with all these provisions that we stood against but were imposed on us, promised to fund this project. We have been telling them that we have no money, the government of South Sudan doesn't have money," Makuei said.

The provisions Makuei mentioned include power sharing with the rebels and the redeployment of government forces some kilometers outside Juba.

"The agreement did not succeed in ending the violence, restoring stability, reforming public institutions and improving the living conditions of ordinary citizens across South Sudan," said Rajab Muhandis, director of South Sudan's Network for Democratic Elections.

The activist said the main objective has not been achieved since the deal was signed two years ago. "To the contrary, the violence has increased, ambushes have made roads impassable, at least one third of the population is displaced internally or in neighboring countries and six million people are severely food insecure," Muhandis said.

Nearly a million refugees from South Sudan have crossed the border to Uganda. Kampala is hoping for more support from Germany after Sigmar Gabriel, Germany's top diplomat, visited the refugees. (10.08.2017)