Liechtenstein bank pays up in tax evasion scandal | Germany| News and in-depth reporting from Berlin and beyond | DW | 16.12.2010

German state prosecutors have settled a dispute with a Liechtenstein bank over tax evasion charges. The bank had harbored countless German tax evaders and has now agreed to a record fine. 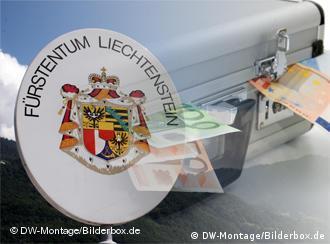 Liechtenstein for decades was a safe haven for tax evaders

German prosecutors have dropped a lawsuit against a Liechtenstein bank over charges of aiding and abetting tax evasion. The state-owned LGT bank agreed to a settlement with a record 50 million euro ($67 million) fine.

The case was triggered when German tax authorities bought several CDs from informants in Liechtenstein, who had copied and stolen data on German tax evaders hiding their money in the small alpine tax haven.

Aside from hunting down German tax evaders with the material, prosecutors also began proceedings against the Liechtenstein bank itself for being an accessory to tax evasion.

The bank's consultants were in effect accused of consciously advising and assisting wealthy Germans to evade paying taxes.

Fine for bank and employees

In the settlement with the German prosecutors, the LGT bank has agreed to pay some 46 million euros. Another 3.6 million euros will have to be shouldered by around 45 individual employees of the bank.

The purchase of the leaked data was highly controversial in Germany as the material had initially been stolen in Liechtenstein and subsequently offered to Germany for the price of several million euros.

The stolen data has lead to a number of arrests in Germany, among them the high profile case of former Deutsche Post CEO Klaus Zumwinkel.

Germany's cabinet has published a draft law designed to get tough on tax evaders and money launderers. The new law is supposed to make it harder for tax dodgers to admit their crimes themselves, thus avoiding a trial. (08.12.2010)

Germany's highest court has ruled that investigations into tax evasion are legal even if they're based on illegally procured information. The authorities can now use controversial stolen CDs that list alleged evaders. (30.11.2010)