The last French combat troops have left Afghanistan. This comes two years before a deadline for all NATO combat forces to withdraw, and was hastened by inside attacks and a change of power in Paris. 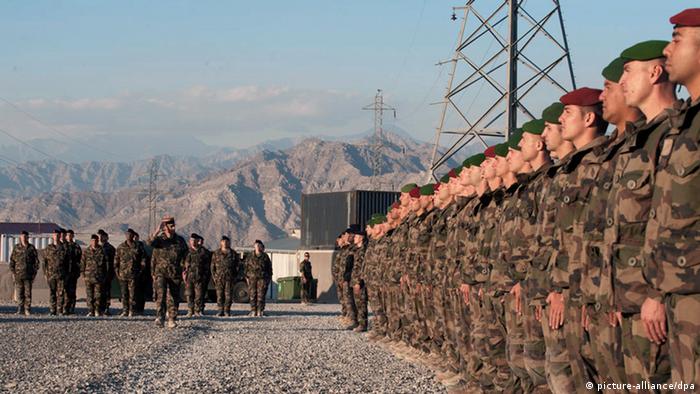 A plane carrying around 200 soldiers from the 25th Belfort infantry regiment took off from Kabul late on Saturday morning. The soldiers were to be flown to the Mediterranean island of Cyprus, before continuing on to France on Tuesday.

The pullout comes much earlier than originally planned, having been hastened first by an attack on French troops, and then by a presidential election.

France's former conservative president, Nicolas Sarkozy, reacted to a series of attacks on French troops by announcing earlier this year that the country would withdraw by the end of 2013. The most notable of these attacks came in January when an Afghan soldier shot dead five French troops.

Following his election in May, Socialist President Francois Hollande fast-tracked the pullout to bring the combat troops home by the end of 2012. The original plan would have seen France's combat mission end with that of the NATO-led International Security Force, at the end of 2014.

About 1,500 French troops remain in the country in a noncombat role. Many of them are to oversee operations to repatriate French military hardware, while others are involved in training Afghan troops to take over responsibility for security in the country.

At the height of its involvement, France had about 4,000 soldiers in Afghanistan, making it the fifth-largest ISAF contingent, after the US, Britain, Germany, and Italy.

France has lost 88 soldiers in Afghanistan since 2001.

DW speaks to retired General Egon Ramms, who was one of the highest ranking NATO commanders and from 2007 until 2010 Commander of the Allied Joint Force, where he oversaw NATO-led ISAF operations in Afghanistan.