The Turkish government has relaxed its restrictions on the use of the Kurdish language in public. Yet media is another matter. Many Kurds in Turkey rely on ROJ TV -- a Danish based station with studios in Belgium. 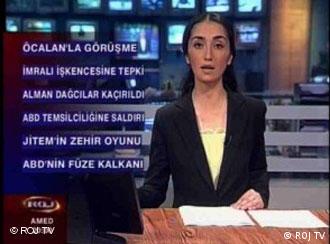 Hajer Katurman is one of the popular faces of ROJ TV

Turkey is home to more than half the world's Kurdish population, who for decades has sought an independent homeland. While that dream has not been realized, there is at least Kurdish media -- often a virtual battleground for people seeking independence or greater autonomy. This is also the case with ROJ TV, a satellite television station based in Denmark.

In June 2008, the German government banned ROJ TV, arguing it's a propaganda mouthpiece for the Kurdistan Worker's Party (PKK). The PKK is blacklisted as a terrorist organization by the United States and the European Union.

Presenter Hajer Katurman and her Kurdish colleagues have a potential global audience of tens of millions of Kurdish viewers from the ROJ TV production studios outside of Brussels. This includes a half a million Kurds living in Germany.

Katurman, who reads a daily news bulletin in Turkish, is disappointed by Germany's decision to ban ROJ TV.

"By criticizing the satellite television ROJ TV, you're basically criticizing the Kurdish people," Katurman says. "The only voice of the Kurds is ROJ TV and ROJ TV is being criticized because Europe doesn't want to deal with the Kurds."

The station broadcasts in the two main Kurdish languages, as well as in Arabic and Turkish. ROJ TV produces a variety of programs. The multilingual newsroom buzzes with journalists and producers and doubles as the backdrop for news bulletins. 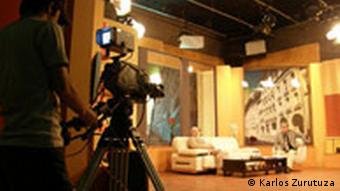 "Rojbash Kurdistan" is willing to hear all viewers

ROJ TV also prides itself on devoting a lot of airtime to Kurdish music and dance programs. However, the station also produces programs that would be familiar to any viewer, anywhere in world.

On a bright yellow set, presenter Edjar Qamsilo interviews a Kurdish intellectual for "Rojbash Kurdistan" or "Good Morning Kurdistan." The set looks somewhat kitschy, but this morning chat show is one ROJ TV's most popular programs.

Everyday the show offers Kurdish viewers the chance to call in and have their say on any topic.

"We try to speak with everyone in the same egalitarian way," Qamsilo says. "Regardless of where viewers come from or what language they speak, [we] bring democracy to everyone. And it's only ROJ TV that does this."

ROJ TV editor Belfin Hezil agrees with her colleague about the importance of the station for Kurds. Hezil produces music, cultural and women's programs and was educated in Germany. She argues that Kurds have a right to their own media and countries such as Germany cannot take that away.

"When you want to discriminate against a people, when you don't let them have access to news, and suppress them, when you don't give them the chance to speak their own language and practice their own culture, it becomes very dangerous," Hezil says. "And Germany knows that TV, radio and newspapers contribute to the development of a people and media contributes to education."

Propaganda or alternative point of view?

In its case against ROJ TV, the German government argues that ROJ TV programs glorify PKK guerilla fighters, encourage Kurds to join the PKK and incite violence. Sores Topak is one of the station's documentary producers and regularly spends months filming guerillas in camps in Turkey's Kandil mountains. 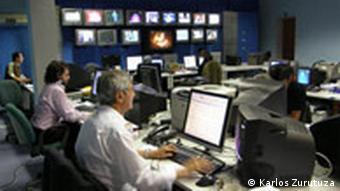 Topak concedes his work could be seen as PKK propaganda, but counters that his films simply document the lives of the guerillas -- something Kurdish viewers are very interested in.

"It's normal that we present a lot of news about the PKK, because the PKK is very active," Topak says. "Of course, when we do these documentary films we also show the wrong side of the PKK, not just the good side or the right side. We are very independent about this work."

The German ban is not the first time ROJ TV has come under scrutiny. In 2005, Turkish authorities requested Denmark to withdraw ROJ TV's broadcast license -- accusing ROJ TV of violating human rights laws and inciting hatred. The Danish Radio and Television Board rejected the Turkish complaints. It noted broadly that news reports of violence in Kurdish regions of Turkey may be unpleasant for the Turkish government, but do not violate Danish media laws, nor does it incite hatred.

In Germany, ROJ TV's affiliate studios in Wuppertal remain closed and the activities of its journalists are restricted. ROJ TV can still be viewed in Germany with satellite TV receivers. In the German parliament, the Left Party has also criticized the government for a heavy-handed approach.

For now, whether ROJ TV is an instrument of propaganda for the PKK or a television channel trying to give a voice to the Kurdish people will largely remain in the eye of viewers -- be it governments wary of terrorism and breakaway regions or an ethnic minority wishing to keep in touch with their home, culture and language.