Kuranyi Leaves Stands, Gets the Boot From Loew 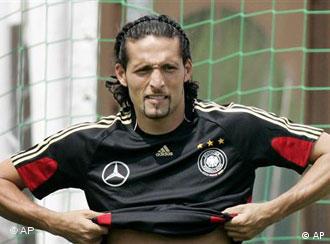 Take the jersey off, Kevin. You won't be needing it anymore

Kuranyi, who had not been picked for Saturday evening's 2010 World Cup qualifier in Dortmund, had been watching in the stands but was found to be absent following the 2-1 win.

Loew said he would no longer select the 26-year-old player for the squad.

"I cannot accept the way Kevin reacted and in future will not nominate him for the national team," the coach said in Dusseldorf.

Kuranyi is believed to have left the stadium during the game which Germany won 2-1 thanks to goals from Lukas Podolski and Michael Ballack.

"I can understand his disappointment, but the reaction on Saturday evening is not acceptable or understandable," Loew said. "At the national team we have 20 top people, and we trainers keep on having to make difficult decisions.

"It surprised us all. Despite several attempts, neither (team manager) Oliver Bierhoff nor I could reach him on the phone."

The German Soccer Federation said there had been no contact with Kuranyi up until the squad's training on Sunday morning.

One of Kuranyi's advisors told reporters on Sunday, "He decided what he for himself found to be right, which was to say I’m going home."

Kuranyi was left off the 2006 World Cup roster by then-coach Juergen Klinsmann. Klinsmann never stated why Kuranyi had to watch the tournament on TV, but German media speculated the player's egotistical reputation didn't fit the team Klinsmann wanted to build at the time.

Kuranyi returned to the national team under Loew in time for the 2008 European Championships and has played in a total of 52 national team matches.

What a difference one game can make. Striker Kevin Kuranyi was in danger of again being dropped from the German national squad. But then he put four goals past Cottbus. (17.04.2008)