As Germany's annual Islam Conference begins, an ultra-conservative group's efforts to give away Korans free to all German households comes under greater criticism by German officials. 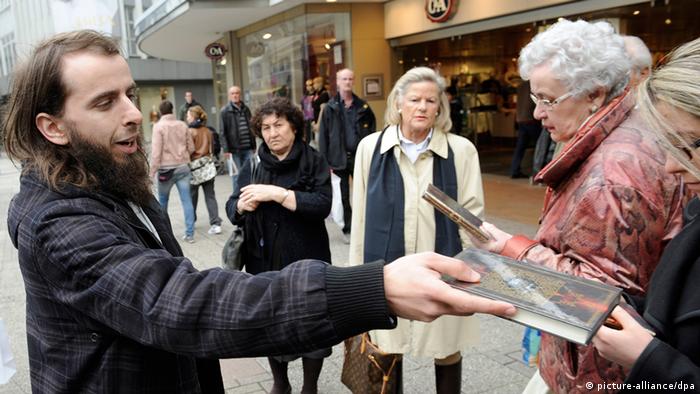 Senior German officials gather in Berlin on Thursday for their annual conference with Muslim leaders, overshadowed by the controversial campaign by a fundamentalist Muslim group to hand out free copies of the Koran.

Interior Minister Hans-Peter Friedrich said on the eve of the conference that a campaign by the ultra-conservative Salafist group Die Wahre Religion (The True Religion) to put a translation of the Koran in every German, Austrian and Swiss household was unwelcome in Germany.

"Religion must not be abused in an ideological bid for power," Friedrich said, urging mainstream Muslims in Germany to join in condemning the group.

Salafists go ahead with Koran distribution

However Muslim leaders have dismissed fears over the Koran distribution as misguided. Ali Kizilkaya, chairman of the Islamic Council, told public television ARD that "a panicked discussion" had surrounded the campaign and that it was "as legitimate to hand out the Koran as it is to hand out Bibles."

Salafists advocate a strict interpretation of Islamic Shariah law, and many are under surveillance by Germany's domestic spy agencies, which see the movement as a threat to free democracy.

Muslims, but not Islam, 'belong to Germany'

The lead-up to the Islam Conference also saw some defiant words from the parliamentary chairman of the ruling Christian Democrats, Volker Kauder, who challenged the suggestion in 2010 by former German President Christian Wulff that Islam, like Christianity and Judaism, belongs to Germany.

"Islam is not a part of our tradition and identity in Germany, and therefore does not belong to Germany," he told the daily Passauer Neue Presse. "Muslims, on the other hand, absolutely belong to Germany. They certainly enjoy the full rights as citizens, that's clear."

On the Koran distribution campaign, Kauder said giving out religious texts falls under "the fundamental right of religious freedom as long as the content doesn't violate the law."

Muslims make up an estimated 5 percent of Germany's population of 82 million. The Islam Conference was initiated in 2006 to facilitate dialogue between Muslim leaders and the German government.

US hits Google with landmark antitrust case 4h ago

Curfew in Lagos as riot police deployed across Nigeria 4h ago