Killer robots instead of soldiers? | World | Breaking news and perspectives from around the globe | DW | 21.05.2013

Increasingly, drones and robots are being used in combat to replace soldiers in high-risk situations. Some researchers and politicians are concerned that, in future, autonomous machines may reign over life and death. 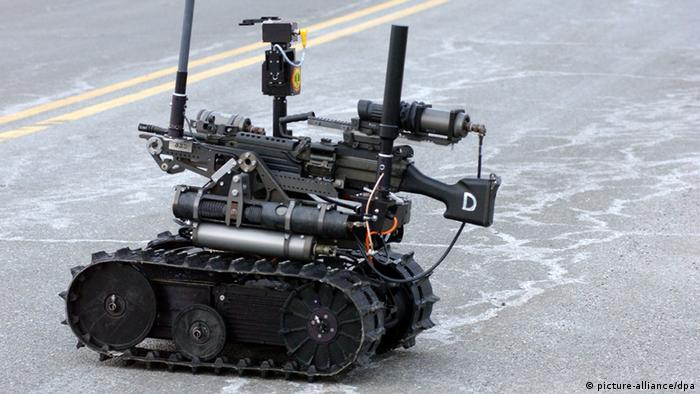 A Pentagon video shows a fighter jet taking off from a US aircraft carrier. At first glance, the maneuver is unspectacular. A second glance, however, reveals a detail that is not necessarily conspicuous: The X-47B stealth fighter has no cockpit, it is an unmanned drone.

According to the US Navy, drone technology has reached another milestone with the first take-off of a drone the size of a fighter jet from an aircraft carrier. It is a further step toward increasingly independent unmanned weapons systems.

Soldiers of the future

More than 70 countries already use unmanned drones - aerial vehicles that are capable of gathering intelligence, or seeking and, if necessary, eliminating targets. At present, the latter decision is still made by human operators via remote control. Human decision-making, however, seems to be waning, while unmanned fighter robots act increasingly on their own. The pilotless aircraft can already be programmed to maneuver completely autonomously. The X-47B drone is still being tested, but once it is ready for action, the aircraft will be able to conduct missions largely autonomously and without human control. 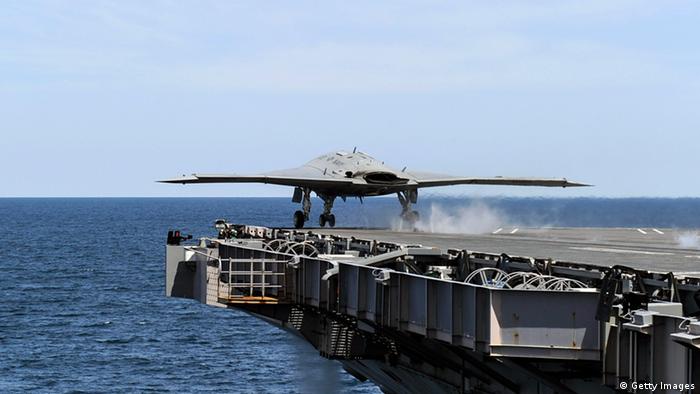 The X-47B drone is designed for carrier-based use

So far, drones that act entirely on their own - and could be termed autonomous combat robots - do not yet exist. Human operators decide whether or not to attack. However, there is great concern that "military pressure will finally lead to the introduction of autonomous systems," says Jürgen Altmann. The physicist and peace researcher at Dortmund Technical University in Germany co-founded the International Committee for Robot Arms Control (ICRAC), an NGO that urges an international debate on combat robots, including clear rules to restrict their use.

From a military point of view, the step toward mechanical soldiers is logical: remote controlled robots are tireless; they can conduct riskier maneuvers than human pilots, who always face the threat of being shot down. But, even remote control has its limitations: Communications between the system and the operator can take a few seconds that, in turn, can decide on a mission's success or failure.

According to a Pentagon strategy paper, the US is seeking increased autonomy for unmanned systems over the next 20 to 30 years. Altmann is convinced that the US is not the only country working on autonomous weapons systems. "Other arms producers will follow suit and at some point, part of the armed forces will be fully automated fighters." 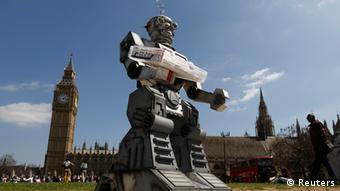 To prevent an arms race, ICRAC and other international NGOs have launched a campaign that demands discouraging the development, production and use of autonomous combat robots: "Stop Killer Robots".

A German Green party politician Agnieszka Brugger even advocates outlawing autonomous weapons systems. "We would be well-advised not to blindly go along with such armament dynamics, but instead to refocus on the risks inherent in the technology," she says. Combat robots cannot discern between enemy combatants and civilians - in a combat operation, they are not able to act according to international law. Agnieszka Brugger and Jürgen Altmann agree: replacing soldiers with machines in combat could also lead to a lowering of military leaders' threshold for violence.

"What we need is a global arms control system," Roderich Kiesewetter argues. The retired colonel and head of the German Armed Forces Reservists' Federation says, however, developments should also not be blocked completely. "We must assume there will be states that deliberately turn to fully automated combat technology," he says, stressing the importance of developing defense strategies against autonomous systems.

In Germany, operations involving autonomous combat robots are a long way off. Plans to adapt the US Global Hawk surveillance drone, re-named Euro Hawk for Europe's skies, have failed. A decision on the purchase of foreign drones - and arming them - has been postponed until after parliamentary elections in September.

In an interview with DW, Christian Mölling at the German Institute for International and Security Affairs explains why Germany's Euro Hawk drone program was canceled and whether a half-billion euros was really wasted. (15.05.2013)