Kerry says US open to negotiation with North Korea

Secretary of State John Kerry has said the US is open to "credible and authentic negotiations" with North Korea over its nuclear policy. Kerry is in Japan on the final day of a four-day tour of the region. 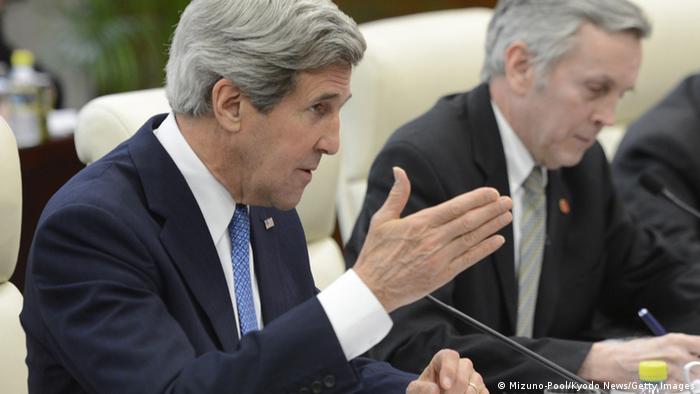 Kerry said Monday in Tokyo that the US will talk with North Korea if it takes "meaningful steps" towards peace, appealing to the country to step back from its recent threats.

"The United States remains open to authentic and credible negotiations on denuclearization, but the burden is on Pyongyang," Kerry said. "North Korea must take meaningful steps to show it will honor commitments it has already made."

Tensions between North Korea and the West have been heightened significantly since the country conducted its third nuclear test in February. Pyongyang has threatened for weeks to attack the US, South Korea and Japan after the UN imposed new sanctions in response to the test.

Kerry's comments come as North Korea celebrated the 101st anniversary of founder Kim Il Sung's birth Monday. The South's defense ministry said it was remaining on guard against a possible missile launch to coincide with the celebration, but officials discounted speculation that a missile launch would proceed on the anniversary day.

Trouble on the Korean Peninsula

While North Korea continues issuing bellicose threats against South Korea, Japan and the US, which have all put defense mechanisms into place, the isolated country's closest ally, China, is losing patience. (12.04.2013)

The top US diplomat is in Japan as part of a three-country tour of the region in which North Korea and its increased nuclear rhetoric have taken a front seat.

"One thing is certain: we are united. There can be no confusion on this point," he said. "The North's dangerous nuclear missile program threatens not only North Korea's neighbors, but also its own people."

The US has said that holding "six-party" denuclearization talks, which would also include North and South Korea, Japan, Russia, China, is the only way it would negotiate with Pyongyang.

While abroad Kerry has called North Korea's rhetoric "unacceptable," but he has also sought to diffuse tension by supporting negotiations with the isolated country.

In Beijing on Saturday, Kerry said both the US and China were committed to “the denuclearization of the Korean Peninsula in a peaceful manner.”

South Korean President Park Geun-Hye in recent days has called for open dialogue and a need to "listen to what North Korea thinks."

But the Pyongyang has called the recent offers for negotiation a "cunning ploy."

"We found the offer an empty, meaningless act," a spokesman for Noth Korea's Committee for the Peaceful Reunificaton of Korea said Sunday in an interview with the state media KCNA.

"If the South is genuine about having talks … it should first abandon its confrontational nature," he said, citing ongoing military drills with the US.

On Monday South Korea expressed regret over the North's rejection, with a Unification Ministry spokesman saying the response was "totally incomprehensible to us and the international community."

France awards Legion of Honor to slain schoolteacher 3h ago