Kerry: Diplomats agree to 'full cessation of hostilities' in Syria within a week

Major world powers agreed on a deal to put a cessation of hostilities in place in Syria and expand the delivery of humanitarian aid to civilians. There was also a call for ceasefire talks to resume as soon as possible. 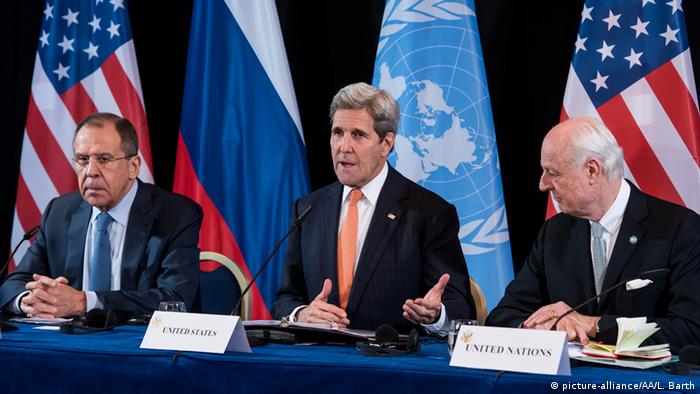 US Secretary of State John Kerry and Russian Foreign Minister Sergei Lavrov announced the agreement in Munich early on Friday, raising hopes that a diplomatic breakthrough could provide humanitarian relief to Syrians and lead to a pause in fighting.

In an agreement that Kerry described as "ambitious," the United States and Russia alongside more than a dozen other world powers agreed to a "cessation of hostilities" within a week and the acceleration and expansion of humanitarian aid to areas besieged by both regime and rebel forces.

The test is now to implement an agreement on paper into reality on the ground, Kerry said.

Speaking with Lavrov and UN envoy Staffan de Mistura, Kerry said all countries involved in the talks had agreed political talks between the regime and opposition needed to restart as soon as possible.

Those nascent peace talks broke down nearly as soon as they started early last week over preconditions set by the opposition, including the end of Russian bombing, humanitarian access and release of prisoners.

Since the collapse of talks, regime forces, backed by Russia airstrikes, have made significant gains on the battlefield in Aleppo city and the northern countryside.

Despite an apparent agreement between Russia and the United States, questions remain over the implementation and timing of Friday's deal.

That was made clear by Lavrov, who rather than setting a date for implementation spoke of establishing "modalities" to cease hostilities and allow humanitarian aid within a week.

Lavrov said the opposition had been unconstructive and that there should be no preconditions to revive talks with the regime.

He added that a broad spectrum of Syrian opposition should attend talks. Russia had previously criticized the exclusion of some opposition groups and the Kurds from peace talks.

Russia and Syria have also had issue with the presence of some Saudi Arabian and Turkish backed rebel groups, which they describe as terrorists. The issue of who is a terrorist in addition to "Islamic State" and the al-Qaeda affiliated al-Nusra Front remains unresolved.

Lavrov said Russia's air campaign in support of the regime would continue against terrorist groups.

Present at the Munich talks, German Foreign Minister Frank-Walter Steinmeier said the true test of the deal to end violence in Syria would come over the next few days.

"We will only be able to see whether this was a breakthrough in a few days," he told reporters.

Security at the venue of the conference

As top diplomats and European leaders confront the Ukraine crisis, German Chancellor Scholz has said the West wants peace but also issued a warning to Moscow.

A cease-fire attempt in two Ukrainian cities has collapsed, with Russia pushing forward with its military offensive. Meanwhile, Americans are being urged to leave Russia immediately.

Afghans scramble to the Kabul airport, which is being secured by US forces. The airport is the only way out for now as the Taliban encircled the capital. DW has the latest.