Finishing the Berlin Marathon in less than two hours and two minutes, Kenyan Eliud Kipchoge set the new world record and cut his own personal best by well over a minute. The 33-year-old had won twice before in Berlin. 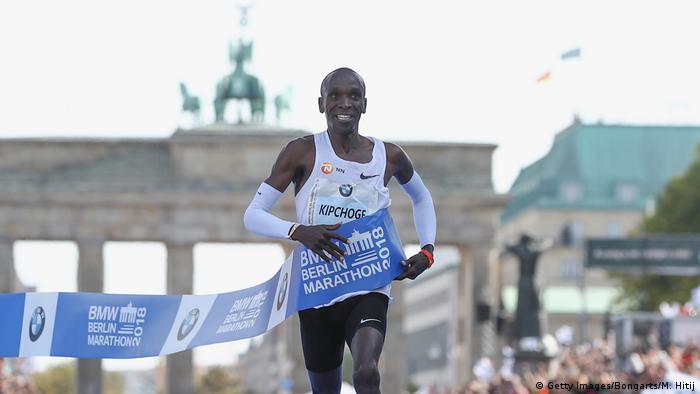 Eliud Kipchoge raised the bar for marathon runners across the globe on Sunday, setting an extraordinary time of 2:01:39 and beating a 2014 world record by compatriot Dennis Kimetto, which was also set in Germany's capital.

"I lack words to describe this day," said Kipchoge, a former world champion over 5,000 meters who also won a gold medal running the marathon in the Brazil Olympic Games in 2016. "I am really grateful, happy to smash the world record."

"They say you can miss it twice but not third time," he added, referring to his previous races in Berlin.

Germany's Foreign Ministry congratulated Kipchoge on Twitter, praising his time as a "fairy tale-like world record" and adding they were "thrilled" by it.

Kipchoge's Sunday record put him well ahead the runner-up Amos Kipruto, who finished the race in 2:06:23, and the third-placed Wilson Kipsang with 2:06:48. All of the top three runners are from Kenya.

Another Kenyan also claimed victory among the female racers: 35-year-old Gladys Cherono posted the time of 2:18:11, ahead of two Ethiopians, Ruti Aga with 2:18:34 and Tirunesh Dibabawith 2:18:55. It is the first time in the history of marathon racing that three women broke 2:19 in a single race.

The fastest German was Valentin Harwardt with 2:19:54.