Karlsruhe to decide on ESM and fiscal pact

Will Germany's Constitutional Court block the ESM and fiscal pact and endanger the euro? On Tuesday, lawyers and politicians took part in tense hearings on the legality and ramifications of both measures. 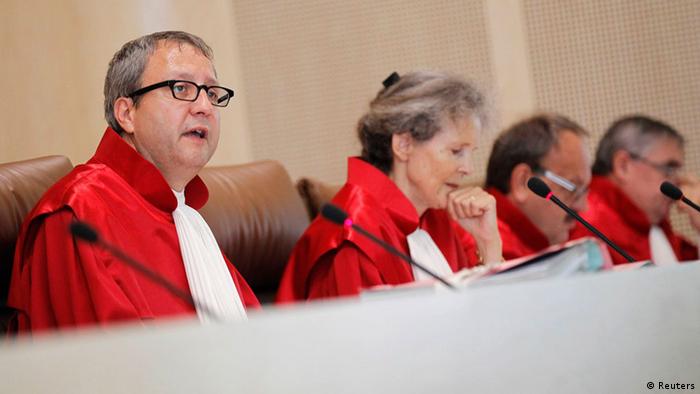 It was just an oral hearing before a mere preliminary decision in summary proceedings, but it attracted intense scrutiny. The question for Germany's highest court at the moment: is the German president permitted to sign into law two measures aimed at stemming the eurozone crisis, the European stability mechanism (ESM) and the fiscal pact? If not, those laws would be tabled until the court reaches a decision on the larger question of their compatibility with the German constitution.

But all eyes are on the Constitutional Court in Karlsruhe because its preliminary decision could indicate how the court will decide on the broader issue of the laws' constitutionality. The tension was tremendous before and during the hearing; in the run-up, warnings came from Brussels and Berlin, should the judges declare the tools to rescue the euro to be unconstitutional. 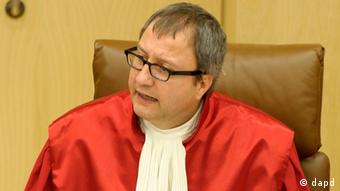 In this preliminary hearing, judges assessed which of two offenses would be greater. If the measures were stopped temporarily, only to be determined compatible with the demands of the constitution, it could send financial markets into chaos in the meantime. But if the ESM and fiscal pact were to be initially ratified, but then be found to contradict the German constitution, they would already be counted as unbreakable international treaties.

Such decisions based on prognoses are difficult, said Andreas Vosskuhle, the head of the Constitutional Court, in his introduction at the hearings. He noted that the Constitutional Court is obligated to respect the assessments of legislators. And, Vosskuhle continued, that respect is particularly important in cases concerning the constitutionality of laws on international treaties bearing great political significance.

Much money at stake

A great deal of money hangs in the balance. The 17 signatories to the ESM would make a shared total of 700 billion euros ($860 billion) available. The ESM would replace the current European Financial Stability Facility (EFSF), and the ESM is intended to be a permanent means of supporting states that are in financial trouble.

Following the most recent EU summit in late June, banks are also supposed to be able to get support directly from the ESM. The fiscal pact obliges states to balance their budgets on the one hand and, on the other, not to surpass a debt limit anchored in their constitutions. The European Court of Justice in Luxembourg (ECJ) would act as a supervisory body to ensure these rules are being followed. Only those who implement the provisions of the fiscal pact are entitled to money from the ESM. 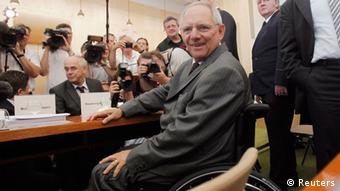 German Finance Minister Wolfgang Schäuble appeared in person in Karlsruhe to defend the ESM and the fiscal pact, arguing the ESM is a more efficient tool than the EFSF. He also suggested that Germany would share less of the joint liability by way of the ESM.

Schäuble went on to warn the judges that allowing significant time to pass before allowing for ratification of the ESM and fiscal pact would lead to a sharp loss of confidence in the eurozone. Doubts in the markets about Germany's will to prop up struggling eurozone partners could intensify symptoms of the crisis - including speculation about individual countries exiting the euro.

Democratic principles also on the line

In addition to practical considerations involving the markets, Karlsruhe will have to uphold basic democratic principles. Opponents of the ESM say it undermines the EU's bailout principles, which specify that no state must answer for the debt of another. In addition, states could have to offer bailout funds indefinitely because the ESM contract stipulates that the ESM's central committee can independently increase the present funding capacity of 700 billion euros.

Critics point out that the wording of the ESM agreement suggests it cannot be terminated. They have also expressed concern about provisions in the fiscal pact giving the EU far-reaching influence over national budgets. Taken together, opponents say these measures would decrease the autonomy of individual nations and parliaments when it comes to establishing their budgets.

German euroskeptics, now internationally recognized, are among the plaintiffs behind the complaints that Karlsruhe is handling jointly. The skeptics include professors Joachim Starbatty and Karl Albrecht Schachtschneider, who have already brought similar complaints in Karlsruhe.

Starbatty believes there is a reasonable chance the court will put a stop to the contested contracts during summary proceedings. "The court will do what the constitution requires," he noted. 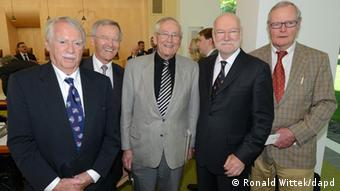 Plaintiffs including Starbatty and Schachtschneider (third and fourth from left)

Herta Däubler-Gmelin, another plaintiff and the former justice minister, said at the hearing that the proceedings concern the rights of all German voters. And legal expert Christoph Degenhart warned that the signing of the contracts in question would lead to an irreversible change of course in the EU.

Degenhart criticized the change in the ESM agreement to allow for direct support for banks, and argued that the "apocalyptic scenarios" presented at the hearing in an effort to bolster the necessity of the ESM and fiscal pact were exaggerated.

The ESM was slated to come into effect on July 1, and the fiscal pact is supposed to be effective starting in 2013. But that schedule has already been pushed back. The first decision of Germany's Constitutional Court is expected at the end of July, but it will likely only affect provisional issues relating to the ESM and fiscal pact.

At Tuesday's hearing, there was a long debate about whether the court should remain in summary proceedings longer in order to reach a more reliable - even if still preliminary - decision on the two crisis measures. That decision concerning their temporary ratification could then function as an index for the court's thinking on the substance of the broader complaints it will consider.

An uncomfortable decision on the way?

Months will pass before the court reaches a verdict on the ultimate legal issues at stake. It's hard to imagine what the consequences would be if the court rules that the ESM and fiscal pact violate the German constitution. After all, Germany would be responsible for nearly a third of the ESM's capital: about 22 billion euros to be paid directly into a permanent bailout fund, with 168 billion held ready as a hedge.

As the fund's largest payer, Germany would possibly have to hold a referendum to change the constitution so that the ESM and fiscal pact could be implemented. And then the question would remain as to whether voters would agree to the transfer of parliament's budgetary powers foreseen in the fiscal pact.

The Constitutional Court has made it clear that weighing these consequences is of importance - at the preliminary proceedings as well as during the main hearings. Vosskuhle acknowledged it would not be an easy decision, but said the court would reach its verdict with both feet rooted firmly in the constitution.

"It is the task of constitutional courts to uphold rules even in cases when that is not politically opportune," the chief justice said.

German court may take its time over ESM

Germany's constitutional court will likely take its time before ruling on whether the workings of Europe's new last-resort lending mechanism are compatible with the law. The decision may be delayed until the autumn. (10.07.2012)

German constitutional lawyer Christoph Degenhart has lodged a complaint against the European Stability Mechanism (ESM) and the fiscal pact. He represents the group More Democracy and its more than 12,000 plaintiffs. (02.07.2012)

The European Stability Mechanism (ESM) and the Fiscal Pact have been approved by the German parliament. But thousands of Germans have joined forces to take legal action against these measures. (30.06.2012)