Rwanda's push to change the constitution and allow President Paul Kagame to serve a third term in power is drawing criticism from every quarter. Kagame has responded by accusing "other nations" of interfering. 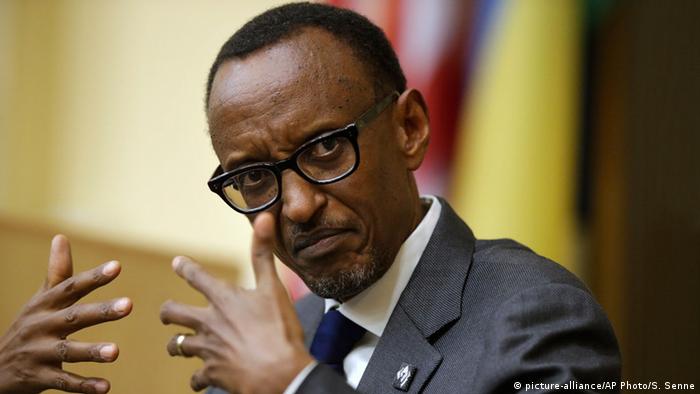 On Thursday, December 3, the European Union (EU) warned that, "the adoption of provisions that can apply only to one individual weakens the credibility of the constitutional reform process, as it undermines the principle of democratic change of government," according to a statement by EU foreign policy chief Federica Mogherini.

The constitutional amendment, passed last month by the senate, reduces the presidential terms from seven to five years and maintains the two-term limit. But it makes an exception for Kagame, allowing him to run for a third seven-year term in 2017 at the end of which the new rules come into force. A referendum on the amendment, expected to pass easily, will be held soon. Pro-government media have mentioned December 18 as a possibility, but this has not been confirmed officially. 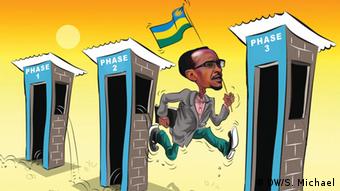 A caricature by DW's Said Michael

The whole procedure has also drawn criticism from the United States. A major donor that has long praised the president for rebuilding the nation after the 1994 genocide, Washington is now pressuring him to set an example to the region by stepping down at the end of his second term in 2017.

Kagame told senior officials of his party, the Rwanda Patriotic Front (RPF) that he has not yet made up his mind: "I am still listening," he said, adding that, "whatever you want from me will be based on the decision of the referendum and thus my answer will come after the referendum." This chimes with the insistence by his aides that any bid for a third term would be in response to the "popular demand" that the president stay in power.

Analysts like Pritish Behuria, from the London School of Economics, are convinced that Kagame will run. This will have far reaching implications for the president's legitimacy, Behuria told DW: "Will the US and other donors continue to support him in the same way? Will he have the same kind of agency to run the country and push economic development? "

Despite his apparent reticence on his intentions to run for a third term, Kagame has reacted in no uncertain terms to criticism from abroad. On Sunday, December 6, he 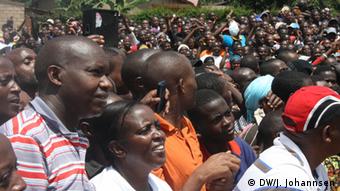 Rwandan's waiting for the president. Kagame is highly popular

lashed out at "other nations" for interfering in his country's internal affairs: "We can be good friends, we can agree to disagree but there is a line when it comes to the interest of Rwandans." Pritish Behuria points out that President Kagame cannot allow himself be seen as bowing down to pressure from the outside.

The debate about term limits has flared across Africa. In neighboring Burundi, President Pierre Nkurunziza's election for a third term was met with fierce opposition and plunged the nation into crisis. And it looks like President Joseph Kabila of the Democratic Republic of Congo is giving some consideration to running for a third term too.

In Rwanda, the main but tiny opposition party, the Democratic Green Party, tried to block the amendment to extend Kagame's term, but a court rejected the bid. On the whole, the process of getting the constitution changed to suit the president's purposed has gone smoothly. Unlike in countries like Burundi, it has not led to protests and bloodshed. Analyst Pritish Behuria says there are a number of reasons for this: "Rwanda has managed to do this, because they have followed a proper legal procedure." There is also no denying that the Kagame government is extremely popular, Behuria says. But there is also another point of view: "The Rwandan government has been able to do this because nobody is questioning them. Those who are questioning him are either forced to leave the government or fight from abroad."

Although Kagame has been praised for rebuilding Rwanda's economy and delivering social change, rights groups say the move to ensure a third presidential term is orchestrated by a government and leader with an iron grip on a country where 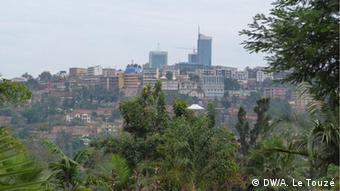 Kagame is credited with implementing some important economic reforms

freedom of expression is severely curtailed. Kigali denies this.

Supporters portray Kagame as a guarantor of post-genocide stability and the economic growth that has transformed the country over the past 20 years. Kagame has run Rwanda since his rebel army ended a 1994 genocide in which some 800,000 people were killed, most of them members of the Tutsi minority and moderates among the Hutu majority.

Rwanda's lower house of parliament debated on Wednesday a constitutional change that would allow President Paul Kagame to run for a third term, a move opposed by the United States and other donors. (28.10.2015)

The Rwandan opposition has suffered a setback in its attempt to foil Paul Kagame's bid to remain president for a third term. The Supreme Court ruled that the constitution may be amended to allow Kagame to run in 2017. (08.10.2015)