In Jonglei state, South Sudan, Lou Nuer and Murle tribes engaged in attacks and counter-attacks that claimed thousands of lives. A government disarmament campaign is now being threatened by a newly emerged militia. 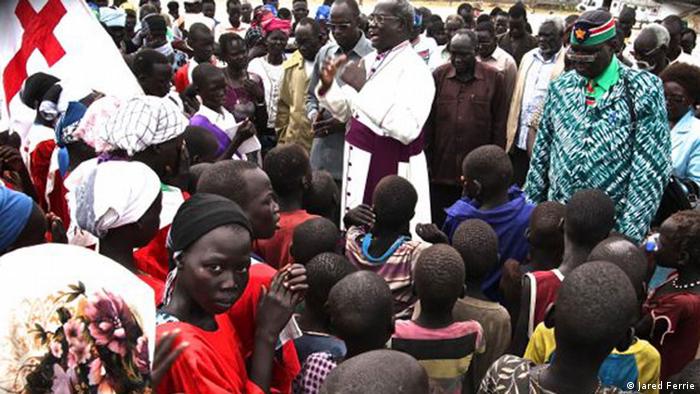 A chorus of children singing to the beat of hand drums rang out across the dirt airstrip as Archbishop exited the United Nations helicopter. Daniel Deng waded into the crowd in his flowing white robe with a purple sash, and greeted villagers in this remote corner of Jonglei state.

Deng is playing a dual role these days: he is the Archbishop of the Episcopal Church of Sudan and South Sudan, and he has also been appointed by President Salva Kiir to head a peace committee to help bring reconciliation between tribes in Jonglei.

About 2,000 people were killed last year in the state, mainly in fighting between the Murle and the Lou Nuer, some of whom live here Yuai, which is the capital of Uror county.

“The president asked me and other colleagues to bring peace to greater Jonglei as a whole, because at the time Jonglei was almost breaking apart,” Deng told a gathering of community leaders. “We were eating ourselves, Nuer, Dinka, Murle.”

In May, tribal leaders from all over the state signed a peace agreement. The archbishop has spent the last week travelling in Jonglei with other members of the committee to monitor the peace and ask communities about their concerns

Simon Duoth is the commissioner of Uror county. In a room packed with community leaders, he told the archbishop that the Lou Nuer and the Murle were respecting the peace agreement. And he said people here turned over their weapons to the authorities after the government launched a state-wide disarmament campaign in March. 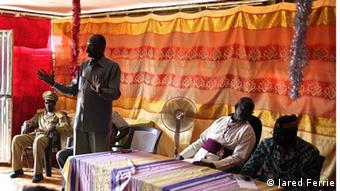 In an interview after the meeting, Duoth said the disarmament campaign has helped contribute to peace. But it's also brought another concern. People now fear that without weapons they won't be able to protect themselves from a new enemy: in the past couple months a rebel militia group has been fighting with the army, which is known as the SPLA.

“I'm worried because I know that the whole population has been disarmed,” said Duoth. “In the whole area there is nobody who's got guns except the SPLA and the police.”

Clashes between the SPLA and the militia have so far been concentrated in Pibor county, which is the traditional homeland of the Murle. But there are reports that the militia is moving into Lou Nuer areas now. Duoth said militia fighters attacked a family in a neighbouring county the previous day, wounding four people, one of them seriously.

The militia is led by David Yau Yau, an ethnic Murle. Deng said the militia is not representative of the Murle community. Instead, authorities consider the fighters to be simply criminals. Nevertheless, if Yau Yau's militia starts attacking Lou Nuer communities, it could reignite ethnic tensions and destroy the tenuous peace.

“If the David Yau Yau group splits out and begins to attack other communities, then that is very dangerous,” he said in an interview. “It can affect the peace if the government does not control it well. But we hope that the government has the upper hand, they will control this rebellion.”

Protection from the Yau Yau

After the ethnic violence last year and early this year, the government deployed a large number of soldiers to Jonglei to provide security and disarm the population. Researchers say that in Lou Nuer areas, people seem to have a more positive attitude towards the army. But it's a different picture in Murle territory. Groups including Human Rights Watch and Amnesty International say soldiers carrying out disarmament there have committed widespread abuses including rape, torture and beatings.

Sudan has accused Israel of carrying out an attack on a military factory linked with chemical weapons storage and small arms. Khartoum has warned that it is prepared to hit back. (24.10.2012)

A key oil-rich region in Sudan, close to the border with South Sudan, has been hit with deadly mortar fire. A hostile South Sudanese insurgent group, which has a presence nearby, has claimed responsibility. (08.10.2012)

The presidents of Sudan and South Sudan have inked cooperation and trade deals designed to restart the flow of South Sudanese oil through Sudanese pipelines. The uncomfortable neighbors still dispute their border. (27.09.2012)