A controversial comic book depicting Jesus as a party animal is not amusing the Greeks. They have banned the book and sentenced its author to a six-month jail term. 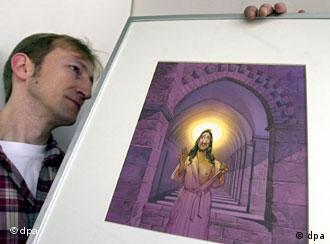 Calling it "hurtful to public decency and blasphemous," an Athens court upheld a ban on a comic book portraying Jesus Christ as a naked surfer high on marijuana and sentenced its author to six months in jail last month.

The book's Greek publishers and four local booksellers were acquitted of all charges regarding the book, called "The Life of Jesus." A separate case on the book's seizure is pending in the Greek Supreme Court.

"If the ban is not lifted, we'll consider appealing to the European Court of Human Rights," said Haderer's lawyer, Minas Mihailovic. 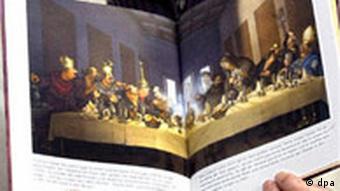 another view of Jesus

Austrian author Gerhard Haderer did not attend the trial and faces imprisonment only if he enters Greece. He called the ruling "scandalous."

"I have done nothing other than to go too far in depicting the contrast between non-believers and believers," he said. "But when the state suddenly begins to set limits for humor, then that is really a reason for disquiet."

Haderer's book, which sold over 100,000 German-language copies, is reportedly the first one to be banned in Greece in more than 20 years. It first ran into trouble in February 2003 after the Greek edition was confiscated by the Greek government and the powerful and conservative Greek Orthodox Church filed a complaint against the author.

Jesus on a surfing trip 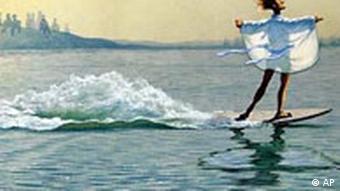 The book is controversial because of its out-of-the-ordinary depictions of Jesus, such as one of his crossing the Sea of Galilee naked on a surfboard, receiving divine inspiration from frankincense. One illustration recasts the Last Supper as a drinking binge. Characters such as fashion designer Karl Lagerfeld and the late guitar wonder Jimi Hendrix mingle with Jesus in the tales.

The book has been published in Austria, Germany, France, Portugal, the Czech Republic, Hungary and South Korea. In some countries, it has sparked protests and a Czech lawmaker wanted the author fined. But in no other country has the book been banned.

"After all, Greece is a member of the European Union and, so you would think, not a religious state in which an artist's freedom of expression is kicked to the ground," said Harderer's publisher, Fritz Panzer.

The crackdown on the book was condemned by the Geneva-based International Publishers' Association (IPA) because of concerns that the ruling will hinder other authors. 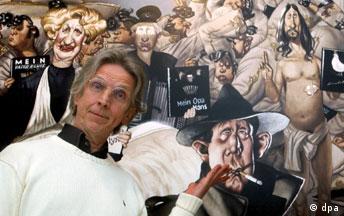 Gerhard Haderer poses in front of one of his comics

"While IPA opposes all forms of religious intolerance, it stands for the elimination of all prohibitions limiting freedom of expression whether imposed by governments or by religious authorities," IPA officials wrote in a statement.

“A Kind of Christian Fatwah”?

Austrian artist Gerhard Haderer is exhibiting caricatures from his cartoon book “The Life of Jesus” in Germany. The book has unleashed a storm of protest in Austria and been branded “blasphemous.” (May 13, 2002)

The controversial biblical film epic The Passion of the Christ opens in Germany this week. Debate has already begun raging on its violence and message even before the first showing on Thursday. (March 17, 2003)

Christendom is losing its grip on Germany, and the country's Protestant Church has decided that a professional advertising campaign is the way to turn the tide. (March 14, 2002)