Japan and Russia's top leaders have renewed talks over a disputed island chain. Their countries' inability to settle the matter has hindered them from ever signing a peace treaty to formally end WWII. 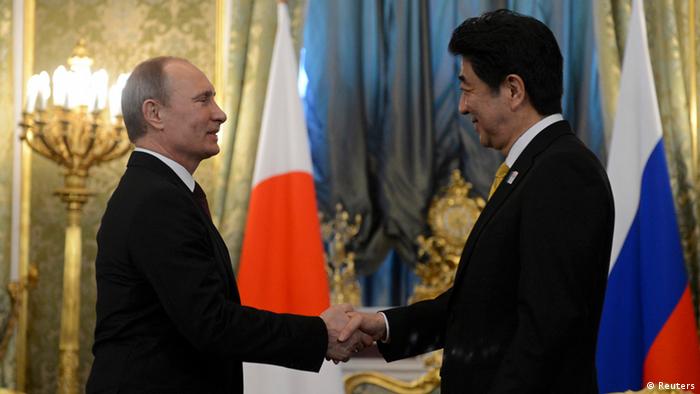 Russian President Vladimir Putin and Japanese Prime Minister Shinzo Abe vowed to find a solution to a decades-long dispute over the Kuril islands, known as the Northern Territories in Japan. The announcement followed a meeting between the two leaders at the Kremlin.

"The talks on a peace treaty agreement in the last few years have been in a state of stagnation," Prime Minister Abe said through a translator. His trip to Moscow was the first by a Japanese prime minister in a decade.

The four Pacific islands - Etorofu, Kunashiri, Shikotan, and Habomai - lie between northeast Japan and Russia's eastern-most Kamchatka Peninsula. Moscow has governed them since 1945, while Tokyo has never relinquished its claim over the land, effectively hindering the two countries from formally ending WWII and from developing bilateral relations.

A territorial dispute has overshadowed relations between Japan and Russia for decades. Next week, Japanese Premier Shinzo Abe is visiting Moscow to initiate efforts to find a compromise. (26.04.2013)

"We have instructed our Foreign Ministries to step up contacts on working out mutually acceptable options" for an end to the dispute, President Putin said.

Initial reports did not indicate when negotiations would begin, nor what the possible outcomes the countries were considering.

The Japanese premier said Monday's agreement to settle the dispute was a "great result" of the talks in Moscow.

Both leaders had previously described the lack of a signed peace treaty as "abnormal."