Jamming of DW is part of Ethiopia's campaign against press freedom

Coinciding with Ethiopia's parliamentary election last Sunday, DW's Amharic service in the country was deliberately jammed. It is part of the government's strategy to silence independent media. 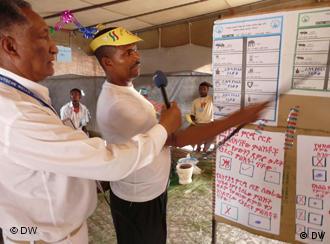 A DW reporter interviews an election helper in Ethiopia.

"These methods are a violation of international law and -- what is even more important -- they are a violation of human rights, particularly the right to freedom of information for people all over the world," Deutsche Welle's director general Erik Betterman said following the news of the intentional disruption of Deutsche Welle broadcasting during the election by the Ethiopian government.

Two and three years ago it was the invasion of Ethiopian soldiers into Somalia and increasing border tensions with Eritrea that led the government in Addis Abeba to disrupt transmission of Deutsche Welle. Germany's international broadcaster has been transmitting in Ethiopia's official language, Amharic, since 1965. 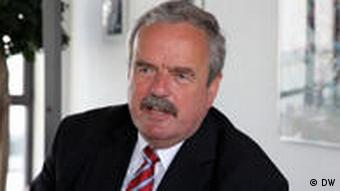 Bettermann has called the renewed interference of DW's frequencies a drastic attack against "Germany's voice for human rights."

According to Ambroise Pierre, director for Africa at Reporters without Borders in Paris, the government's latest jamming efforts are linked to parliamentary elections in Ethiopia.

"The jamming of Deutsche Welle in Ethiopia must obviously and directly be viewed in a political context. The election on May 23 was an important milestone for Meles Zenawi and his government. This government made it impossible for domestic and international media to inform the Ethiopians independently," Pierre said.

On the world stage Prime Minister Meles, a Marxist and former guerilla fighter who has led the country for 19 years, presents himself as Africa's negotiator on climate issues and the G-20. But at home in Addis Abebba, the seat for the African Union, human rights groups say he bullies the opposition, journalists and civil society activists.

Freedom of press not respected

In May after the jamming of the Amharic broadcasts of Voice of America became public, Reporters without Borders sent an open letter to Meles, urging him to uphold the freedom of the press during the election. That demand was ignored, said Pierre:

"With our letter we wanted to appeal to the prime minister to not interfere with the work of the media. But he obviously didn't heed our demand, since Deutsche Welle is being jammed now as well." 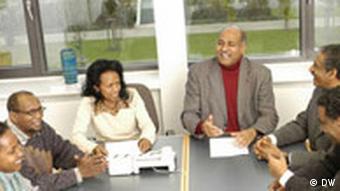 The Amharic department at Deutsche Welle in Bonn, Germany

Since the election of 2005 which was marred by 200 deaths and charges of massive fraud, the Ethiopian government has been engaged in an aggressive lobbying campaign against the Amharic service of Deutsche Welle. These efforts culminated in a complaint to the German parliament alleging that DW's reporting was biased. While this accusation could be invalidated after broadcast manuscripts were re-translated into German, the jamming was only stopped after the intervention of Chancellor Angela Merkel in Addis Abbeba in 2008.

According to Bettermann the continued attacks by the Ethiopian government and the blocking of unpopular Internet sites through the aid of Chinese software and hardware is a confirmation that Germany's broadcaster is on the right track.

"Since this isn't the first time that we are being jammed, this shows that what we transmit to Ethiopia must be considered as very serious," he said and added that the government in Addis Abbeba must be "thin-skinned" to block media access. Information educates the people and governments must be able to withstand criticism, he stressed.

Ethiopian authorities could not officially be reached for comment. However, confronted with the alleged jamming, Prime Minister Meles denied any interference with DW's signal in a conversation with the head of the EU's election observer mission (EU-EOM) in Ethiopia.

Listeners from all over the world have protested against the jamming during the election weekend. In Ethiopia people have begun calling in to the Deutsche Welle to express their frustration and regret that the international broadcaster could not be heard reporting on the country's election.

Ethiopians vote Sunday in the first election since a disputed 2005 poll ended in violence and strained the African nation's relations with the West. Ludger Schadomsky, head of DW's Ethiopian service, gauges the mood. (23.05.2010)

Ethiopia's opposition intends to contest the results in the country's national elections amid allegations that incumbent Prime Minister Meles Zenawi rigged the vote. (24.05.2010)