In Zulu, Jabulani, the name for the ball designed for the 2010 FIFA World Cup means "celebrate." But days before the start of the tournament, many players aren't exactly singing its praises - just the opposite, in fact. 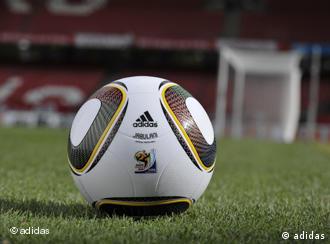 Players are heaping criticism on the new ball

Jabulani has been touted by its creators, German sporting goods firm Adidas and scientists from Loughborough University in the United Kingdom, as the best World Cup ball in history. But for those who have actually put the ball to the test in real world conditions, that couldn't be further from the truth. According to Brazil's goal keeper, Julio Cesar, the ball is dreadful, no better than a plastic ball you'd pick up at a grocery store. And many of his colleagues agree. 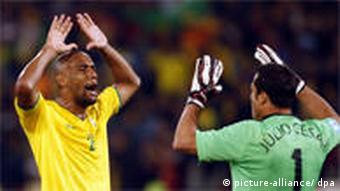 It could be a huge embarrassment in the making, especially as Adidas is counting on sales of the Jabulani to help turn the firm's dismal profit margin around. Adidas has been working on the Jabulani since the last World Cup in 2006. Over those four years, the ball has been developed, studied, and tested both in wind tunnels, and in real games played by some very capable players.

Leading the development team was Dr. Andy Harland from the Sports Technology Research Group at Loughborough University in Great Britain, who also played a key role in developing the Teamgeist, the ball used for the 2006 World Cup in Germany.

According to Harland, they were tasked with addressing the aerodynamics of the ball. They spent months playing around with putting features on the ball to make it as stable as possible by changing the way the air flows around it. In addition to that, the researchers even took the topography of the game sites into consideration. 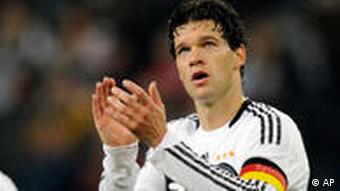 The verdict is in

Despite the extensive testing, the new "grip and groove" technology, and the politically correct design with 11 colors representing the 11 official South African languages, some of many of the players who will be taking to the field starting on June 11 aren't very impressed.

Italian striker Giampaolo Pazzini has called the ball a "catastrophe." Brazilian forward Luis Fabiano even went so far as to imply that the ball is bewitched, saying it changes direction mid-flight, as if it's being controlled.

And Fabiano's teammate, Julio Baptista, has said that when he kicks the ball, it always shoots off in the opposite direction of the one intended.

For some observers, the commotion is just par for the course, as players always grumble about a new ball. But for Adidas spokesman Brueggen, such statements are tantamount to slander. He pointed out that if you look closely at the players and goalies making these accusations you'll notice one common thread among them: the all have contracts with Adidas' competitors.

"I assure you that the Adidas Jabulani is rounder, more precise and consistent than any other ball that has come before it,” Brueggen said. 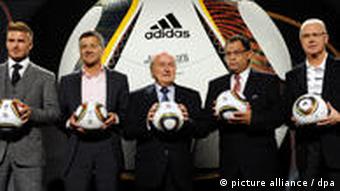 The Jabulani was officially presented to FIFA in December 2009

During the development phase, the Jabulani was kicked around by many players who have contracts with Adidas, including Brazilian midfielder Kaká and the former captain of the German national team, Michael Ballack, called that ball "fantastic," and said it "does exactly what I want it to."

Of course, the German manufacturer admits it isn't just ball control they're concerned with. They hope the Jabulani will help boost their sales. In the last quarter of 2009, Adidas reported losses of 60 percent. The bar has been set pretty high for South Africa. In 2006, Adidas, which has been the official maker of the FIFA balls since 1970, reported that it sold 15 million Teamgeist balls.

Adidas sets its hopes on World Cup for sales renewal

German sporting goods maker Adidas is hoping that the next round of World Cup mania, together with changes at its US Reebok unit, will help pull sales out of the doldrums. (07.11.2009)

Is Germany heading for a fall on artificial turf?

Saturday's match against Russia could be the game that clinches a ticket to the World Cup for Joachim Loew's side. Yet the Germans will be up against more than just the collective talents of Arshavin, Semak and Co. (09.10.2009)