Italy is famous for its coffee. But there's one Italian town that particularly prides itself on its long coffee tradition. Trieste is the Mediterranean's main coffee port, and it's also a hub for the coffee industry. 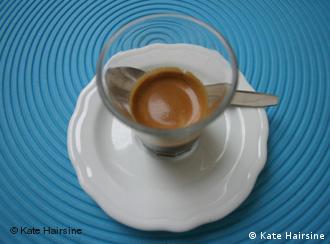 In Trieste's grand central square Piazza dell' Unità, café-goers can sip on their cappuccinos while watching sea gulls dive for fish and sailing boats tie up on the jetties of the Porto Doganale directly in front of them.

It was thanks to this port that Trieste's coffee tradition was born more than 250 years ago. Back in 1719, when Trieste belonged to the Austro-Hungarian Empire, the Habsburg Emperor Charles VI gave the port tax-free status. As a result, the port boomed.

At the same time, the coffee craze hit Europe. As the Viennese became addicted to caffeine, green beans destined for Austria's roasteries become one of Trieste's biggest imports.

Today, the main port activities have moved to the Porto Nuovo -- or New Port -- in the south of the city. But the smell of coffee still hangs thickly in the air thanks to the hundreds of coffee warehouses that line the port.

"Trieste is the main Mediterranean coffee port," says Max Fabian, president of Asscaffè, Trieste's coffee association. "On average, we have 1 to 1.5 million bags of green coffee beans stocked in the port, and more or less 2 to 2.5 million bags are imported through the port of Trieste each year."

With so many beans passing through the port, the Trieste region has developed a whole industry around coffee, with traders, shipping agents, wholesalers, graders, decaffinaters and roasters all clustered in the region.

One of these is the Trieste-based firm Pacorini, which moves more than 10 percent of the world's raw coffee beans. But they also clean, grade and test the beans in the port before shipping them onwards to traders and roasters.

Trieste is renowned as a coffee port

"We have to find any defects," says Sergio Vatta, as he sucks in a mouthful of espresso, rolls it around his mouth, and spits it into a plastic spittoon more usually found in a dentist's surgery. Vatta, a quality controller with Pacorini, analyses green bean samples in a laboratory based in the port.

"You start with the raw beans, and then you roast the coffee sample and grind it," he explains as he pours the next batch into the grinder. But even grinding the beans is a science.

"The grinding is different depending on the color of the coffee and the origin, and you have to grind in a very exact way to obtain a good result," Vatta says.

Vatta carefully weighs 13 grams of the freshly ground beans, makes two espressos and carries them over to the testing table before tasting the hot coffee in quick sharp slurps.

"It's a good cup, there are no defects, it's sweet with good body, aromatic enough and it's good coffee," he proclaims.

Blending for taste and aroma

After the green beans are tasted, sorted and washed at the port, they still have to go through a major step before they can be drunk -- that of blending and roasting. Of course, roasters aren't hard to find here in Trieste and the surrounding region. There's everything from the well-known brand Illy to smaller companies such as Hausbrandt. 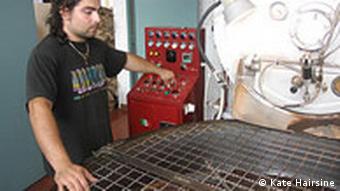 The San Giusto roastery knows the secret of the perfect blend

At the small roastery San Giusto, sacks of green coffee beans from India, Columbia, Brazil, Vietnam and Guatemala are stacked waiting to be processed.

"There aren't any coffees that can stand alone; it's exactly for this reason that roasters blend coffee," owner Marino Petronio yells above the roaring sounds of the coffee roasting machine. "A bitter bean by itself will just give you a bitter coffee otherwise."

"Or you can have a coffee with a great smell, but then you drink it and you just have the aroma but no taste," Petronio adds. "But these individual qualities put together can make something that's better than the sum of its parts."

San Giusto sells much of its coffee to former Yugoslavian countries, where according to Petronio, people are "particularly attached to Italian coffee, and especially that from Trieste."

"Trieste has a wonderful reputation worldwide and is renowned as a coffee port," he says.

It's a coffee love affair

But it's not just working with coffee that has a tradition in Trieste. It's also drinking it. Trieste locals down twice as much coffee as the Italian average, going through a staggering 10 kilos per capita a year. While there are many bars in the center that serve coffee on the go, Trieste has a feature unique within Italy: the traditional Viennese-style coffee house. 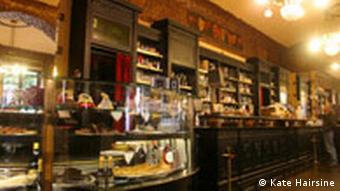 The Caffè San Marco is one of five historical cafés left in Trieste. From the frescos to the wood-paneling and the marble tabletops, not much has changed here since literary figures such as James Joyce, Italo Svevo and Umberto Saba used to drink here 100 years ago.

"It was frequented by writers then and still is now," says Franco Fellipi, who has been running the café for the past decade.

He points to a table in the corner of the cavernous interior reserved for Claudio Magris, an Italian writer who has been mentioned as a contender for the Nobel Prize for Literature.

"Professor Magris comes every day when he is in Trieste," Fellipi says from behind the bar, where he was busy making a "caffè in B." That's an espresso served the Triestine way -- in a tiny glass, not a cup. There is no consensus on who brought this particular tradition to Trieste.

"There are those who say it was the Turks, but it also could have been the Jews," Fellipi explains. "There have been Jews here since the 18th century -- we have the biggest synagogue in Europe here -- and Jewish people traditionally drink their coffee from a glass."

The dark aromatic coffee is delicious. But anyone drinking an espresso in a town with more than 250 years of coffee experience shouldn't expect anything else.

The ECF represents the joint interests of the European coffee trade and roasting industry.

"Trieste has a wonderful reputation worldwide and is renowned as a coffee port." Download Inside Europe's report.

Find out when and how to listen to DW radio programmings.

Money, sex, relationships, career, and more! Every month, a new episode of an honest, inspirational, and exciting podcast brings you stories from guests that will win your heart or at least leave you thinking.

Starting September 13, DW will broadcast daily radio programs in Dari and Pashto via shortwave to provide credible information to listeners in Afghanistan.