Israel has defended its record before the UN, ending an 18-month boycott of the Human Rights Council. All 193 UN member states are meant to undergo a review of their records every four years. 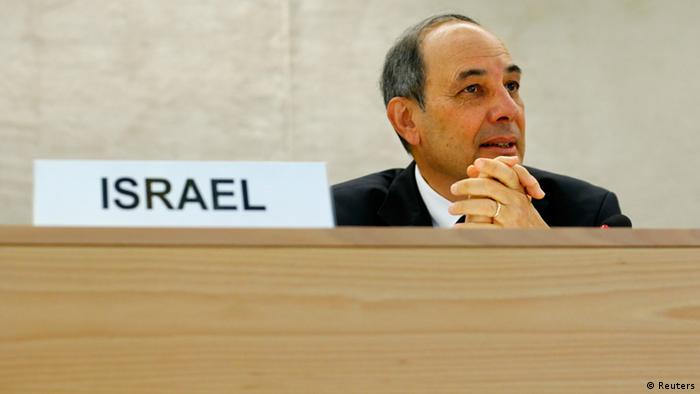 Israel faced criticism for expanding settlements in the West Bank as the country's Deputy Attorney General Shai Nitzan addressed the council in Geneva.

Israel has repeatedly accused the council of bias. "Israel has been regularly subject to significant, and often politically motivated, scrutiny over the years, disproportional to the worldwide human rights situation," Nitzan said. "The promotion of human rights is a just yet complex task in every society - especially in a democratic, multicultural society that constantly confronts terrorism - and is one which we are committed too," he added.

The review process offers UN members a chance to quiz countries about their rights records and the steps taken to redress failings, but does not set out sanctions for those found at fault. Several countries hit out at Israel over its treatment of Palestinians, and Turkey criticized the "shameful situation" and the "impunity of settlers."

"We reaffirm that Israel's policy of aggression and racism is an infringement on the rights of the Palestinian people," said Qatar's Geneva envoy, Almuhannad al-Hammadi.

'Not a perfect record'

In January, Israel became the first country to boycott the council, after previously cutting ties with it in March 2012 when the body said it would probe the human rights impact of settlements. On Tuesday, Palestinian Ambassador Ibrahim Khraishi said that Israel's presence showed that the country's leaders wanted to pick and choose when to accept scrutiny.

Over 2,000 Israeli protesters gathered outside Ofer prison in the West Bank on Monday to voice their indignation at the government's decision to release more Palestinian prisoners. (29.10.2013)

"I think that Israel only understands the language of pressure," Khraishi said. "So its presence today has no value."

Israel's decision to attend reportedly came after Germany warned of a diplomatic backlash if the country again stayed away. The decision came after Foreign Minister Guido Westerwelle had sent a letter to Israeli Prime Minister Benjamin Netanyahu warning him that boycotting the review would inflict "severe diplomatic damage" on Israel.

"Our record is before you," Israeli ambassador Eviator Manor said. "It is not a perfect record."

US Deputy Ambassador Peter Mulrean criticized Israel's domestic policy, urging the country to boost resources for Arab and Bedouin communities, and guard against the clout of Orthodox rabbis in determining policies that could discriminate against non-Orthodox Jews and non-Jews.

Manor, the Israeli ambassador, said that Israel's attending the review did not imply total re-engagement with the council.