Islamic militant groups join forces in new threat to Pakistan | Asia | An in-depth look at news from across the continent | DW | 16.10.2009

With almost daily attacks against government targets, Islamic violence in Pakistan has reached a new quality. The brazen assaults signal that even the country's highly guarded nuclear arms may not be safe anymore. 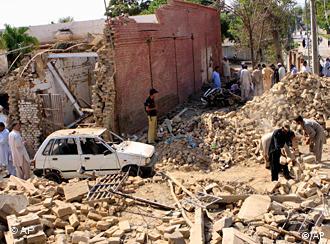 The list of extremist attacks in Pakistan grows longer by the day - and the Islamic insurgents seem to be getting bolder. In the last 10 days alone, extremists have carried out five major attacks across the country. The most audacious one was an assault of Pakistan's army headquarters in Rawalpindi, which developed into a prolonged hostage crisis and ended after government forces were finally able to defeat the attackers.

In response to the most recent attack, Pakistan's interior minister said: "The enemy has started a guerrilla war," and urged: "The whole nation should be united against these handful of terrorists, and God willing we will defeat them."

But experts not only doubt the claim that it's only a few extremists who are behind the spate of attacks. They also fear the emergence of a new and more potent Islamic threat than the country has ever seen before and are increasingly skeptical of the government's ability to effectively combat the extremists.

"The very serious incidents we witnessed the past couple of days - bombs in Peshawar and the attack on the army's headquarter in Rawalpindi - show how serious the situation has become and how much it has deteriorated," Gunter Mulack, who until last year was Germany's ambassador to Pakistan, told Deutsche Welle.

To be sure, Mulack adds, recurrent attacks are not new to Pakistan, but the frequency and the strategy behind the assaults are troublesome. 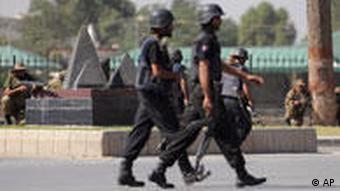 "What is so worrying about the recent assaults on the army headquarters and on Lahore is that the Pakistan Taliban is claiming these attacks, but arguing that it is their Punjabi Taliban brothers that have actually carried them out," Shaun Gregory, the head of the Pakistan Security Research Unit at the University of Bradford, told Deutsche Welle.

In essence, previously separate and independent Islamic groups are joining forces to fight the Pakistani government. What makes the apparent link-up of Islamic militant groups so much more dangerous than they were on their own is the fact the fighters stemming from Punjab, the country's largest and most important province, were trained by the Pakistani military to fight a guerilla war in Kashmir against India.

"What appears to be happening is not only a joining up of these groups, Pakistan Taliban and Punjabi Taliban, but also that the expertise in counter-insurgency warfare, for instance the kind of coordinated ground assault we have seen, that kind of expertise is now being transfered into the Punjabi Taliban," said Gregory.

Despite the ever-growing threat from Islamic extremists, an all-out miltary defeat of the Pakistani army, one of the largest forces in the world, is not on the cards. "There might be revolt of Islamists within the army," said Mulack. "That is the only dangerous possibility I can see, but I don't see a regular defeat of the army."

Shaun Gregory agrees: "The issue for me is not so much a defeat of the army, which I don't think is realistic, but that levels of violence become so great in the city and elsewhere that we see a loss of confidence in the army and the possibility of the government collapsing and the fragmentation of the state."

The apparent bonding of different militant groups will only increase the pressure on the government, forcing it to confront an insurgency where it didn't have to before. "What we are seeing is that these groups are giving the tribal Taliban groups a reach right across the country that they previously did not have," said Gregory. "And that's why we have seen attacks not only in Islamabad and Rawalpindi, but in places like Lahore and elsewhere. That is not only an evolution of the threat, but it is emerging as major challenge to the stability of the state."

While the experts agree that Pakistan is experiencing a new level of extremist insurgency, they differ on whether this constitutes a threat to the country's nuclear arsenal.

"I think that the nuclear weapons of the Pakistani army are well-guarded and it's not possible for some groups or some committed individuals to get power over these weapons and use them," said Mulack. "So this is something that I do not see as an imminent threat."

"That's not a view I share," said Gregory, referring to US Secretary of State Hillary Clinton's and others' repeated claims that Pakistan's nuclear arms are safe. Gregory argues that the militants already have proven that they can reach the gates of nuclear weapons facilities. He admits that so far they have not shown that they can penetrate these facilities and get their hands on the actual weapons or components. 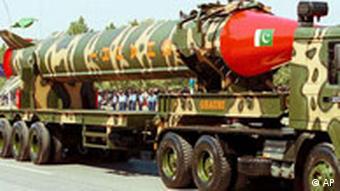 Experts are divided over the safety of Pakistan's nuclear arsenal

"But the kind of tactics we have seen evolving in the last few weeks, the use of suicide bombs at entry points to bases, the use of ground assault teams and the kind of attack we saw on the army headquarter means that the militants in my view appear to be evolving methods which would allow them to enter nuclear weapons bases and possibly seize those weapons or at least seize components of those weapons," he said, calling the risk to Pakistan's nuclear arsenal "significant and growing."

The repeated official statements that Pakistan's nuclear weapons are safe sound to Gregory like whistling in the dark. "I think we are hearing a lot from Western and Pakistani politicians about reassurance, but I think behind that reassurance there is a growing unease, particularly in Washington, that actually the army and the intelligence service in Pakistan to some extent are losing the ability to control and secure their nuclear weapons."

German military pistols are being sold on the black market in Afghanistan and Pakistan. The weapons were sent in 2006 and were intended for local police and army personnel. (12.10.2009)

The foreign minister of Pakistan, Shah Mehmud Qureshi, has confirmed reports that Pakistan’s most wanted militant, Baitullah Mehsud, has been killed in a suspected US drone strike. (07.08.2009)

Watch this DW video on Islamic fundamentalism in Pakistan