Iraqi Ambassador: We Appreciate Germany′s Stance | News and current affairs from Germany and around the world | DW | 12.02.2003 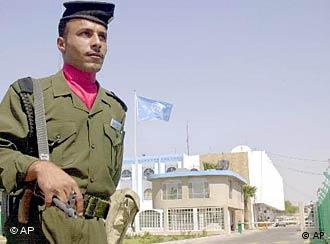 U.N. headquarters in Bagdad: Can it expect more peacekeepers and weapons inspectors?

Since the Gulf War in 1991, Iraq and Germany have not exchanged ambassadors. Iraq's Embassy in Berlin is headed by chargé d'affaires Muayad S. Hussian, who carries out the duties of an ambassador in Germany. DW-WORLD spoke to the Iraqi representative about Germany, Iraq and the United States.

NATO members Germany, France and Belgium have blocked a request for defensive military assistance for Turkey in the event of an Iraq war. What is your reaction to that move?

They did the right job. It is another show of global resistance to the American war cry.

While in the past Germany was one of the United States’ closest allies, currently it is one of the greatest opponents of American policy towards Iraq. How does Iraq view Germany’s position?

Germany’s current stance is in agreement with the vast majority of the world. We very much appreciate the fair stance taken by the government of the Federal Republic of Germany.

Would you say Germany’s political opposition against a war in Iraq has helped the Iraqi government?

It helps Iraq, both the government and the people.

Not recently. My last meeting with them was around one week ago.

German and French ideas to disarm Iraq are still very sketchy. However, they may call for many more U.N. weapons inspectors -- possibly backed by a large contingent of U.N. peacekeepers -- to be sent to Iraq. Would Iraq agree to let more inspectors and armed peacekeepers into the country?

The U.S. is putting pressure on Germany and France to accept a new U.N. resolution that would call for military intervention if Iraq does not comply with resolution 1441. What do you think will be the outcome?

No, this is just what you hear from the United States of America and Britain. No other third country says that.

The U.S. says that Iraq is not complying with U.N. resolution 1441 and that it will be disarmed by force. Do you still think a war can be avoided?

Is Iraq going to make any concessions in the next couple of days? Can we expect any new initiatives from Iraq?

President Bush has said the game is over for Saddam Hussein. What will you do in the case of war?

We don’t care about what they are saying about us because all the world is with us. It’s not easy to start a war against us because of this resistance. You can see that in statements from all countries throughout the world.

Do you think the U.S. would attack alone, without a U.N. resolution or other allies?

That would mean they would fight the whole world because it’s not easy for the world to accept such aggression.

A "serious" crisis took hold within NATO on Monday after Germany, France and Belgium veteoed a U.S. proposal to begin preparations for NATO's defense of Turkey if war breaks out against neighboring Iraq. (Feb. 10, 2003)