Iranian President Hassan Rouhani and his Turkish counterpart have pledged closer ties, as the two nations seek to set aside their differences. Rouhani's visit to Turkey is the first by an Iranian president since 2008. 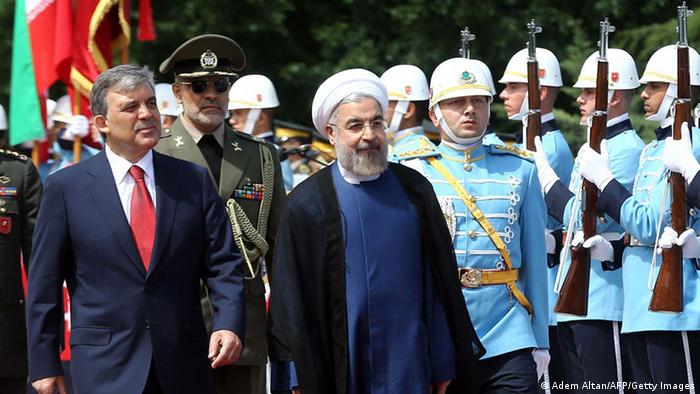 Speaking to reporters in the Turkish capital on Monday, Iranian President Hassan Rouhani said that Iran and Turkey sought closer ties in an effort to quell violence currently threatening to destabilize the Middle East.

"Iran and Turkey, the two important countries in the region, are determined to fight against extremism and terrorism," Rouhani told reporters following a meeting with Turkish President Abdullah Gul.

"The fight against violence, extremism, sectarian conflicts and terrorism is Iran's major objective," he added.

It was not immediately clear whether the two leaders would work toward concrete diplomatic policies during Rouhani's two-day visit. However, the Iranian leader expressed optimism that the meetings would "undoubtedly be a turning point in the two countries' relationship."

The political involvement of Tehran and Ankara in other Middle East disputes have fallen along religious lines, with Iranian support generally falling to fellow Shiite Muslims and Turkish support to fellow Sunnis.The strain in Turkish-Iranian ties stems from both diplomatic disagreements and economic competition in the region.

The Syrian civil war, in particular, has pitted the two nations against one another. Tehran publicly supports Syrian President Bashar al-Assad's regime, which has led a three-year military campaign against armed dissident factions seeking his removal from office. Meanwhile, Ankara has backed the Syrian rebels. It also faces the immediacy of a humanitarian crisis as it continues to see displaced Syrians cross into its territory.

Iran is also an important natural gas supplier for Turkey which imports roughly some 10 billion cubic meters of it annually. The trade partners are currently engaged in a legal dispute over Iran's gas pricing. However, despite these differences Ankara has backed Iran's right to nuclear development and is, therefore, also hopeful that ongoing P5+1 talks could end economics against Iran.

The killing of Mohsen Fakhrizadeh, Iran's top nuclear scientist, could increase tensions between Tehran and Washington and make it even more difficult for President-elect Joe Biden to mend ties with Iran.

Half of Nagorno-Karabakh's population displaced by fighting 07.10.2020