Mahmoud Ahmadinejad has arrived in Egypt, marking the first visit by an Iranian leader to the country since Iran's 1979 revolution. Iran's president has said he is hoping to improve relations between Tehran and Cairo. 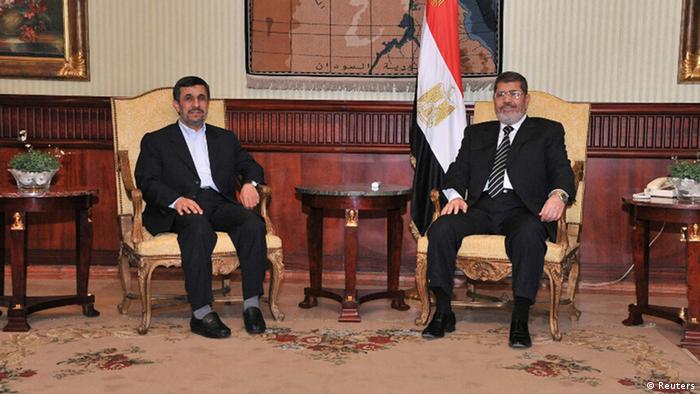 The two leaders held discussions on regional developments and on "how to end the bloodshed in Syria... without military intervention," Egyptian state news agency MENA news said.

Iran is a close ally of the Syrian government, while Egypt has called on President Bashar Assad to step down.

During his stay, the Iranian leader will attend an Organization of Islamic Cooperation conference in Cairo, and hold talks with Egyptian officials. Ahmadinejad is also scheduled to meet with the head of Al-Azhar, the over 1,000-year-old university that is Sunni Islam's highest institution of learning.

Prior to leaving his country, Ahmadinejad told reporters he was making the trip to improve Iranian-Egyptian relations.

"I will try to pave the ground for developing cooperation between Iran and Egypt," he told told Iran's official IRNA news agency, adding the visit would "definitely influence the bilateral ties" between the two countries.

The Iranian president has also said he wanted to visit the Gaza Strip, the Palestinian territory which neighbors Egypt to the east and is run by Hamas.

"If they allow it, I would go to Gaza and visit the people," Ahmadinejad told Beirut-based TV station Al Mayadeen Tuesday. "The political geography of the region will change if Iran and Egypt take a unified position on the Palestinian question."

Tehran severed ties with Cairo following the 1979 Islamic revolution and a 1980 peace agreement between Egypt and Israel by then-president of Egypt Anwar Sadat.

Morsi visited Tehran in August to attend a conference of the Non-Aligned Movement. But Egypt has generally been cautious about re-establishing full diplomatic ties with the Iran, apparently wary of straining relations with Gulf countries like Saudi Arabia and Qatar.

Iran has been supportive of Assad's government during the country's ongoing civil war, while Egypt and the oil-rich Gulf states have come down on the side of the opposition.

"If Tehran and Cairo see more eye to eye on regional and international issues, many [issues] will change," Ahmadinejad said.

Two years after the fall of Hosni Mubarak, the shifting political situation in Egypt remains unsettled. DW sorts through the chaos and answers questions about the most important developments in the country. (03.02.2013)