American computer giant Apple has launched its newest product to much fanfare. Though not all that glitters is gold. It seems some parts of the iPad, including the European technology, could cause trouble. 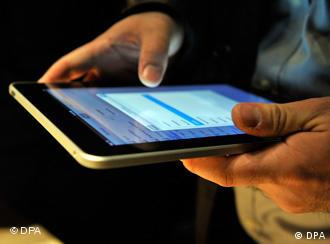 Apple customers have been waiting for years for this moment

After seemingly endless weeks of rumors, Apple finally released its tablet computer, calling it the iPad.

The device, which will sell worldwide at a starting price of $499 (356.65 euros) later this year, represents something in between the company's extraordinarily popular iPhones and its line of laptops.

"If there's going to be a third category of device, it's going to have to be better at these kinds of tasks than a laptop or a smartphone; otherwise it has no reason for being," said Apple CEO Steve Jobs at the special event in San Francisco.

The basic model comes with 16 gigabytes of flash memory storage and WiFi - it will go on sale in two months. For an additional $130, users can buy an iPad with third-generation (3G) wireless capability, for high-speed access from nearly anywhere. The most advance model on offer will top out at $829.

American technology pundits drew instant comparisons to other tablet devices, including the Amazon Kindle, which was released in late 2007 and was revised late last year.

"This is the Kindle-market, but it's better than Kindle, because you can do more on it than you can on a Kindle," said Farhad Manjoo, a technology columnist for Slate.com. He wrote after Wednesday's landmark announcement that "Apple's new tablet is the computer I've always wanted," and that he definitely would be buying one.

The iPad is meant to be slimmed-down, and very simplified. It runs the iPhone operating system - and will run all current iPhone applications - and is made from a single piece of touchscreen glass and aluminum, which sits at 242.8 mm tall and 149.7 mm wide. It is only 13.4 mm thick and weighs 0.68 kilograms.

The iPad does have some drawbacks: like the iPhone, the iPad will only run Apple-authorized applications sold through Apple's online store. Also like the iPhone, it cannot multitask, and can only run one application at a time. In addition, many pundits and Apple observers have noticed its lack of both USB ports and a camera.

However, unlike iPhones sold in most countries worldwide, except for those in some European Union countries like Belgium and France, the iPad will be sold with an unlocked SIM card to supply 3G and EDGE wireless Internet access for a fee to a particular mobile provider. That means that an iPad owner could easiliy swap SIM cards to avoid high roaming fees when crossing national borders.

Jason Snell, the editor of Macworld magazine, noted that because the iPad already comes unlocked, its rollout worldwide may be much faster than the iPhone.

"It sort of frees Apple to make deals with carriers internationally, but if they don't make deals with a carrier in a certain country, you can still just stick a SIM in it and it will work," he said. 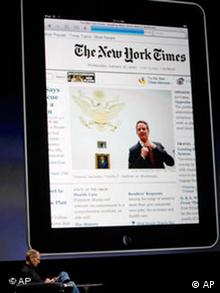 The iPad can be used as an e-reader, just like Amazon's Kindle but with more features

However, one potential hiccup may be the type of SIM card it takes. The iPad uses the emerging "microSIM" standard.

MicroSIM cards, which are also known as 3FF cards, were developed over the last several years by the European Telecommunications Standards Institute. This new type of card is about 50 percent smaller than the SIM card that most Europeans and other worldwide GSM users are familiar with.

Nearly all American technology industry watchers remain unfamiliar with the new microSIM format. In fact, the first products with 3FF cards for the American market were announced just a few weeks ago at the annual Consumer Electronics Show in Las Vegas.

Ken Dulaney, an analyst with Gartner Research, said he had never heard of the 3FF standard, adding only that it was a "very different type of format."

He wondered if European mobile carriers would be able to release new SIM cards soon enough so that European and foreign consumers could avoid high roaming fees.

"My concern would be for anybody who travels, that this isn't widely accepted in the marketplace," Dulaney said. "If I take my tablet to Italy and I want to buy [a local SIM card] for a couple weeks vacation, I'm not going to be able to find one. Getting that format into all the locales needed is going to take a major change here, so we'll see."