After Thursday's raid and arrests, many are questioning the long reach of American copyright law. The legal action is the latest in a series of harsh tactics executed abroad from Washington, DC. 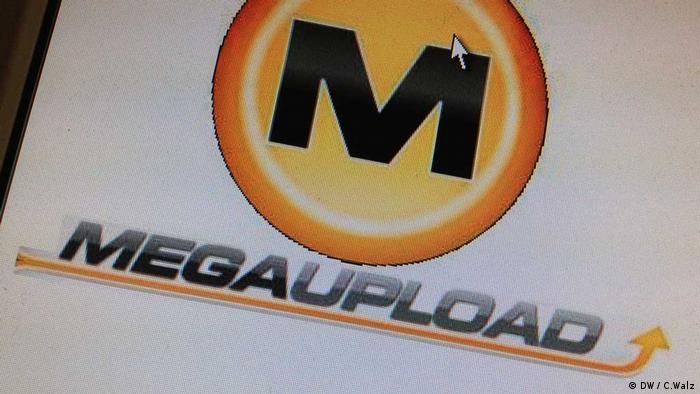 Megaupload has been charged with copyright infringement

On Thursday, four Europeans were arrested in New Zealand and $50 million worth of Megaupload-related assets were seized worldwide. Three more Europeans named in the indictment remained at large.

The US alleges that the site caused an "estimated harm" to copyright holders, "well in excess of $500 million," adding that the "conspirators allegedly earned more than $175 million in illegal profits through advertising revenue and selling premium memberships."

The four men, including the leader, Kim Dotcom, a dual citizen of Finland and Germany, appeared before a judge in an Auckland courtroom on Friday. Dotcom was denied bail at the hearing. 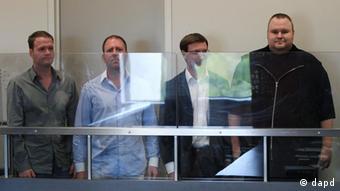 Four Europeans, including Kim Dotcom (right) appeared in an Auckland court on Friday

According to the APNZ news agency, also on Friday, Detective Inspector Grant Wormald of the Organised & Financial Crime Agency New Zealand said that his agency carried out the raid and arrest with 76 local officers, working with the FBI. He added that the arrests were requested by the United States for the purpose of extradition.

"It is extremely disturbing that a non-US citizen running a non-US business on non-US soil can be arrested by US authorities for breaking US law," wrote Rick Falkvinge, the founder of the Pirate Party Sweden, in an e-mail sent to Deutsche Welle. "If the Americans are running the world by this kind of force, then I demand voting rights in the United States."

Copyright legal actions to the fore

The international legal maneuvering by American authorities is the latest, and largest, in a string of aggressive actions against foreign entities that the US Department of Justice argues are in violation of American copyright law.

Last week, a 23-year-old British student, Richard O'Dwyer, lost his extradition hearing to the US in a London court over a website that he founded, TVShack.net. That domain had previously been seized by the US Department of Justice, also under copyright violations.

The American government has argued it has jurisdiction over O'Dwyer because his site - like all domains with .com and .net addresses - are routed through Verisign, a key Internet infrastructure company that is physically located in the state of Virginia. 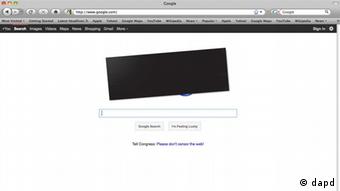 Many websites, including Google, protested SOPA and PIPA on Wednesday

Earlier this month, the Spanish newspaper El Pais published leaked documents showing that the American government pressured Spanish authorities to pass the "Sinde law," an online piracy bill that was passed in January 2012. According to the documents, the American ambassador in Madrid threatened Spain with "retaliation actions."

The arrests come one day after websites all over the world conducted a vast protest against two bills pending in the American House of Representatives and Senate, known as Stop Online Piracy Act (SOPA) and the Protect Intellectual Property Act (PIPA), respectively.

On Thursday, following the protests, according to the website Politico, Senate Majority Leader Harry Reid released Democrats from pledges to support PIPA, while Senate Minority Leader Mitch McConnell called on Democrats to set the bill aside for the moment.

"I am concerned about the collateral impact of such cases on the free Internet and on innovation," wrote Marietje Schaake, a Dutch member of the European Parliament, in an e-mail sent to Deutsche Welle.

Schaake also was recently named as the EU's first rapporteur for the European Strategy for Internet Freedom in the World.

"I am concerned about the way in which suing Internet companies can become a goal in and of itself," she added. "This kind of legal activism reaching from the US into the EU is undesired." 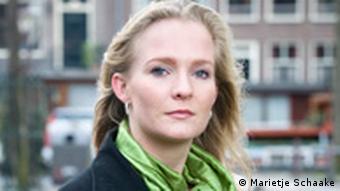 One German IT attorney also pointed out that under German law, such a total shutdown would not be possible.

"As long as there is a legitimate business model - and a hosting platform for transferring files is not per se an illegitimate service - a service is only liable if they have knowledge about illegal uses of their platform," wrote Dominik Boecker, an Internet and intellectual property lawyer based in Cologne, in an e-mail.

"To take a whole service down means that there is no legitimate business at all - that's very hard to imagine, even in the case of Megaupload."

Schaake and others, including Pirate Party activists worldwide, continue for a vast re-thinking of copyright law.

"It is high time we start to work on copyright reform instead of cracking down with such a heavy emphasis on enforcement. Internet and new technologies have brought enormous opportunities to bring music and movies to wider audiences at lower prices," Schaake added. "I don't see how the criminalizing of audiences and Internet users can benefit the entertainment industry."

US shuts down popular file-sharing site

A number of people have been arrested in New Zealand in a US effort to crackdown on online pirated material. Among those arrested was the German former CEO of the world's most popular file-sharing site, Megaupload. (20.01.2012)

Hadopi has named 60 French people who have reached their 'third strike' in online piracy warnings. But none of them have actually had their Internet access cut off by court order, as per the one-year-old French law. (27.10.2011)

After seizing the TVShack.net domain, US authorities argue Richard O'Dwyer should face charges in American courts. British legal experts, however, are not convinced by the US Justice Department's arguments. (03.08.2011)