A group of international auditors has resumed talks in Athens on Greece's progress in implementing reforms in return for more financial aid. Privatization issues were said to be at the center of discussions. 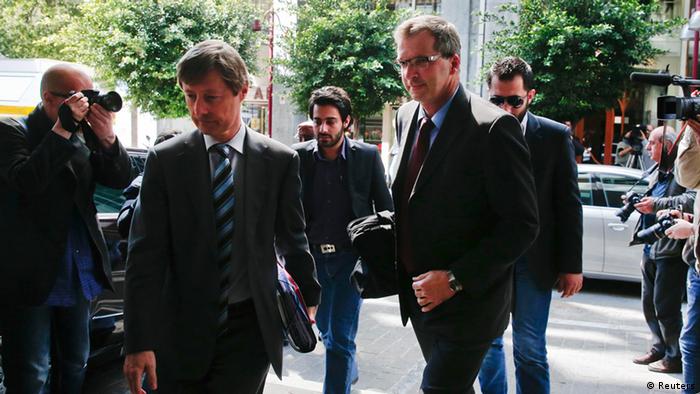 Auditors from the EU, the European Central Bank and the International Monetary Fund went back to Greece Wednesday for another round of stock-taking as the nation continued to wait for a pending loan installment.

The meetings with the Greek finance and economy ministers are expected to focus on disagreements on how far Athens had come to tackle overdue reforms.

Late last week, the EU executives had hinted that creditors might delay their next visit until January, providing a sign of growing discontent with the speed of the reform process. However, it also appeared that the two sides had an interest in reaching a deal before Greece assumed the rotating EU presidency in January.

Deflation worms its way into Greece

Deflation worms its way into Greece

Finance Minister Yannis Stournaras insisted that officials would work with the troika mission chiefs to close as many pending issues as possible before the Christmas break.

They were expected to at least reach agreement over the privatization of the troubled Greek defense contractor EAS as a prerequisite for unblocking another tranche of financial aid worth 1 billion euros ($1.4 billion). Debates were also set to center on a new property tax and layoffs in the public sector with a view to reining in spending.

Greece aims to return to growth next year, with overall output to increase by 0.6 percent throughout 2014. However, this will be too little to substantially bring down record-high unemployment of about 27 percent.