Injured German State Premier Conscious and in Stable Condition | Germany | News and in-depth reporting from Berlin and beyond | DW | 03.01.2009

The premier of the eastern German state of Thuringia, Dieter Althaus, has been successfully revived from an artificially induced coma after a severe skiing accident this week in Austria. 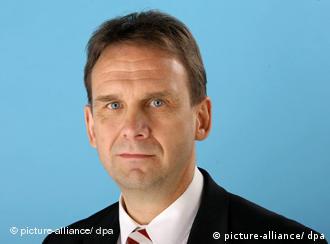 Althaus is said to be in stable condition

A spokesman of the government of Thuringia said on Saturday that Althaus was able to speak and move his limbs normally. "He (Althaus) could say his name and his date of birth," Fried Dahmen said.

The 50-year-old Althuas, from Chancellor Angela Merkel's Christian Democratic Party (CDU) collided with a female skier on the slopes Thursday afternoon, according to local police.

The woman, reportedly from Slovakia and a mother of four, died on the way to the hospital. Althaus was evacuated for medical treatment by helicopter to a hospital in the Austrian town of Schwarzach im Pongau where he was immediately treated for a serious head injury.

Doctors treating the politician said on Saturday that Althaus' condition was stable but warned it would take a while for him to recover fully.

Earlier, the Thueringe Allgemeine Zeitung newspaper reported that the fact that Althaus was wearing a helmet at the time of the accident probably saved his life.

"The premier had a skiing helmet on, the woman didn't," the paper quoted an Austrian police spokesman as saying.

Last week, another German skier without a helmet was killed on the Austrian slopes.

The head of the CDU’s state parliamentary group in Thuringia, Mike Mohring, expressed shock and grief over the incident.

“I offer my deepest condolences to the relatives of the woman who died in the name of the Althaus family and CDU,” he said. “We hope and pray that the condition of the premier stabilizes and he will recover from his injuries.”

Althaus has been premier in Thuringia since 2003. He was planning to run for reelection this August.