Indian police clash with protesters over women in Hindu temple

A Hindu protester has died as rival groups clashed with each other and the police in the Indian state of Kerala. Traditionalists are enraged that two women of child-bearing age had entered a temple of a celibate god. 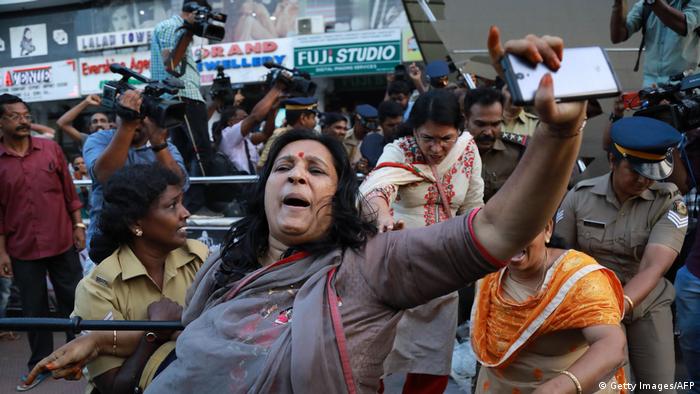 At least one person died and 15 more were injured in religiously fueled violence across the Indian state of Kerala, as scuffles over women entering the temple of Ayyappa continued on Thursday, police said.

"The person who died was part of a BJP (the nationalist Bharatiya Janata Party) demonstration yesterday and got injured when some stones were hurled (at the demonstrators)," Kerala police spokesman Pramod Kumar told the AFP news agency.

"His injuries were serious and he died late Wednesday night. At least 15 others were injured in incidents across the state," Kumar added.

Separately, local media reported that a group of BJP supporters was pelted with stones from an office of the Communist Party, which holds power in the southwestern state.

A woman police officer was also attacked and molested by a group of protesters near the town of Kochi.

Since Wednesday, police have arrested more than 700 people and taken more than 600 protesters into preventive custody, Kumar said.

Breaking of a 'no women' ban

The violence first escalated in the Indian state of Kerala on Wednesday, with police charging Hindu worshipers with batons and using tear gas, water cannon and stun grenades to disperse rioters in the state capital, Thiruvananthapuram.

Conservative Hindus gathered in front of the state parliament after two women had entered the nearby temple of Sabarimala. The sanctuary is dedicated to the god of growth, Ayyappa, and women of menstruating age are traditionally not allowed to enter the grounds.

The authorities legalized the traditional ban in 1972, but the move was revoked by India's Supreme Court in September. The decision prompted outrage among the Hindu community. Hindu worshipers have staged repeated protests and pledged to keep females between ages of 10 and 50 out of the premises. A preacher who supported lifting the ban was targeted in an arson attack in October.

It was not immediately clear how the two women managed to evade the traditionalists early on Wednesday.

One of the female visitors, who said her name was Bindu, told a TV channel that she and her associate were given "police protection" for their pre-dawn visit. 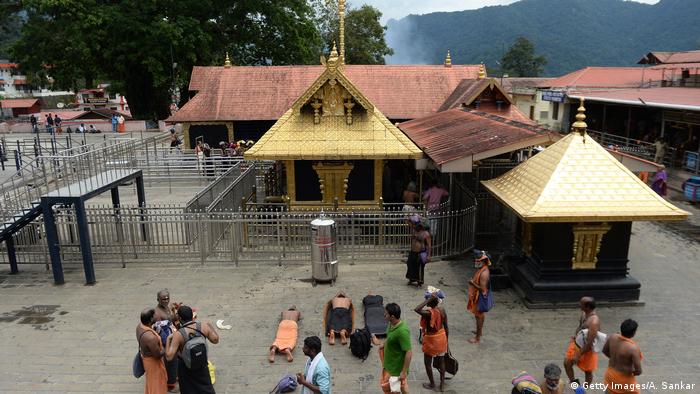 "We walked two hours, entered the temple around 3:30 a.m. and did the darshan," the woman said, referring to a Hindu religious ritual of looking at an image of a deity.

Local media reported that the temple had been briefly closed for "purification" rituals after the intrusion was discovered.

Kerala's state government defended their decision to protect the women as a matter of civil rights.

The religious conflict has been fueling a political standoff between the far-left parties ruling Kerala and the right-wing nationalist BJP, which holds power at the federal level.

The head of the BJP in Kerala, P.S Sreedharan Pillai, slammed the women's visit as a "conspiracy by the atheist rulers to destroy the Hindu temples."

He called on "all the devotees" to come forward and protest, saying that his party would "support the struggles against the destruction of faith by the Communists."

On Tuesday, Prime Minister Narendra Modi claimed the issue of the Sabarimala temple was more about religious tradition than gender equality. He pointed to other Hindu temples and ceremonies where men are not allowed to attend. 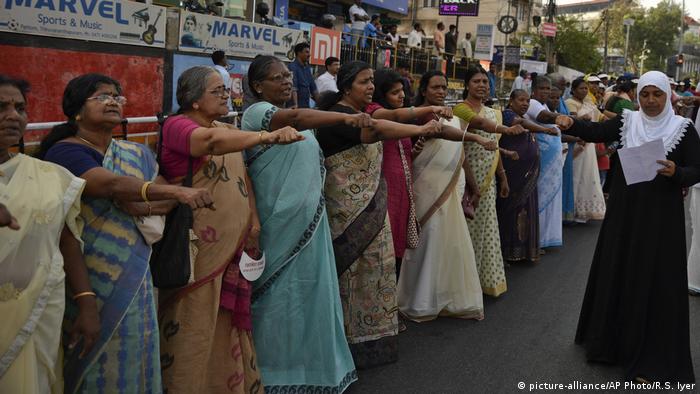 On the same day, thousands of women took part in a statewide protest by forming a 620 kilometer (385 mile) human chain, termed the "women's wall," calling for gender equality and access to the Sabarimala temple.