India-Pakistan talks overshadow SAARC agenda | Asia | An in-depth look at news from across the continent | DW | 07.02.2011

No concrete decisions have come out of the secretary level talks between India and Pakistan on the sidelines of the South Asian Association for Regional Cooperation (SAARC) conference in the Bhutanese capital Thimphu. 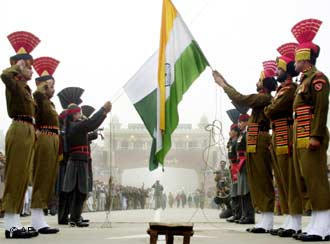 India-Pakistan dialogue overshadows the SAARC agenda, but is seen as crucial for any cooperation to go forward

Greater integration and cooperation in trade, tourism, climate change and youth are the main agendas of the SAARC Council of Ministers meeting in Thimphu, February 8-9. It will look at how the SAARC Food Bank could be used better for storage and distribution to help deal with challenges of global food security cropping up.

One further topic is the SAARC visa exemption scheme, which proposes to expand the list of people who would be exempted from visa requirement for travel within the eight SAARC member countries. 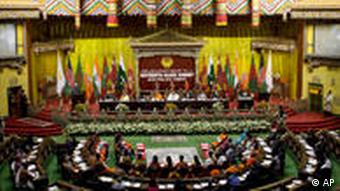 At present only Members of Parliament, judges, 100 identified business leaders, sportspersons and 150 journalists can avail the SAARC visa facility. Professor Valerian Rodrigues from the Centre of Political Studies at India's Jawaharlal Nehru University raised doubt whether such visa schemes would work.

"I wonder whether all the restrictions would go as far as the visa requirements are concerned; these issues," Rodrigues told Deutsche Welle.

"The issue of immigrants is a deeply political issue in South Asia," he pointed out. And between countries like Bangladesh, Sri Lanka and India such issues could easily become "very tormenting."

The idea is to improve the system and to implement it effectively without any fear of misuse. But Rodrigues says intra-regional disputes, particularly those between India and Pakistan, have generally tended to overwhelm the larger issue of regional cooperation.

Indo-Pakistani dialogue has been stalled since the Mumbai terror attacks.

At the bilateral meeting in the Bhutanese capital, India’s Foreign Secretary Nirupama Rao and her Pakistani counterpart Salman Bashir were not able to set a date for the next round of talks.

The dialogue - the first high-level meeting between the two countries since July - was held on the sidelines of the SAARC conference. 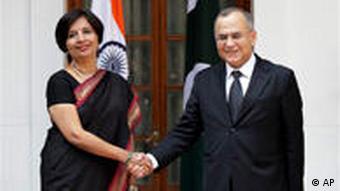 Political science professor T.V. Paul from Canada's McGill University says the SAARC agenda is often hijacked by bilateral meetings between the two countries. He says a "radical change" is not possible any time soon. "Waiting for a total settlement of that Kashmir conflict it is going to take several decades," Paul added.

He described it as "an obsession with national security state and borders" that was only causing the people to suffering as a result.

The two sides, he added, needed to work on the economic side and keep their territorial dispute over Kashmir at bay.

"If you want to solve that entire gamut of conflict and then think of trade, South Asia will never have that. So we need to think of a starting point."

Regional trade, Paul added would be the right starting point. One of the main reasons for the low and uneven intra regional trade in South Asia is the 'national security mindset' in the region, he said. 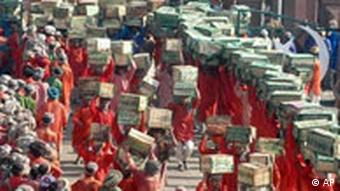 "Countries there somehow think if they trade they may become dependent on India. And Pakistan especially fears that it will lose its freedom." This he said was an "archaic and old fashioned understanding of trade."

But Paul pointed out that some subtle positive change was taking place with good trade relations slowly developing especially among Bangladesh, India, Bhutan and Sri Lanka. He however said that for more favorable trade relations it was also necessary for India to be more generous with the trade agreements while dealing with countries in the region that have lesser capacity.

Rodrigues placed more emphasis on the India-Pakistan peace process, which he said was crucial for any SAARC agenda or cooperation to go forward.

"I think the conflict between these two countries has resonance in terms of issues between other countries," he pointed out. "Sorting out their conflict is absolutely important for the region to come together."

He added that while the talks might not bring any dramatic changes, no advance would be made at all without speaking. Their coming together to hold the talks he said was a positive measure towards the peace process.

Continued violence in Kashmir overshadows talks between India and Pakistan

As India and Pakistan try to revive their stalled peace process, the crisis in Indian-administered Kashmir continues to fester to the detriment of relations between Islamabad and New Delhi. (15.07.2010)

The prime ministers of India and Pakistan held talks on the sidelines of a regional summit in Bhutan's capital Thimphu on Thursday. (29.04.2010)

The South Asian megacities of Karachi, Delhi or Dhaka are the fastest-growing conurbations in the world. This rapidly increasing urbanization poses more and more risks to people and society. (30.07.2010)