In Bhutan, archery is a national sport with a difference

Archery, the national sport of Bhutan, is a common feature of everyday life. It is played differently from the international game and is seen as a celebration of the country's way of life. 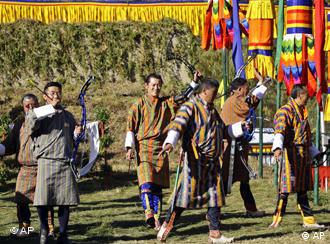 Call it love for the game or tradition, most Bhutanese men would not say "no" to a game of archery. Many of them own a set of the highly priced bow and arrows. 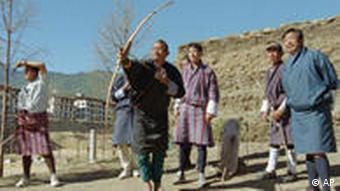 Most Bhutanese men wouldn't say "no" to a game of archery

The sport became very popular in the late 1920s, during the regime of Bhutan's second king, and is now an integral part of everyday life. However, it was only declared as a national sport in 1971, when Bhutan joined the United Nations.

The Bhutanese have been competing in the Olympics since 1984, but archery in the home ground is entirely different - in terms of how the targets are placed and the atmosphere.

A celebration of Bhutan's way of life

"Its not just sport but its celebration of the way of life and an expression of our rich culture and heritage," former minister Kinzang Dorji, who is the president of the Bhutan Archery Federation, told Deutsche Welle.

"Because when we play archery it's not just archery - the players also have to participate in singing and dancing. Family members also join in, so it's a kind of a social event."

Each team usually has their own group of dancers and singers. They serve not only to cheer for the team but to distract their opponents through songs and dances, by standing around the target and making fun of the shooter's ability. Every time a target is hit, a kind of howling can be heard. 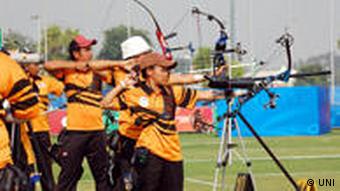 There is also a considerable amount of walking as archers shoot from one end of the field to the other. They have to be sturdy to be able to shuttle between the two targets, which are 145 meters apart, double the Olympic distance of 90 meters.

Apart from the grand festivity complete with traditional attires, the federation president says it is probably the only sport, where players are allowed to drink.

"Traditional archery wouldn't be complete without a lot of indulging in eating and of course drinking," he said. "This is something which has been passed down and it is still continued."

Thirty-two-year-old Tenzin, a teacher in the capital city who plays regularly, says this can be a problem because "in some cases people fight with each other."

The federation president agrees and says there is some concern about the "use of compound bows" that can lead to archers as well as spectators being hit. In the villages, people use traditional bows made from bamboo

The federation has a rule when there are large numbers of spectators that "the archers should not go overboard with drinking."

Kinzang Dorji, who is an avid archer and has played since the late 1950s, said the team managers also had to make sure that players "do not get too drunk."

Amid much criticism, the Bhutanese authorities have started to enforce strict penalties for smokers and people selling tobacco products, including hefty fines and even imprisonment. (13.01.2011)

Organizers say they wanted to highlight a different cultural dimension by focusing on the Himalayan country. Historical manuscripts from Bhutan are presented abroad for the first time at the fair. (11.02.2011)