Idealistic students transform tower block into a community | Germany | News and in-depth reporting from Berlin and beyond | DW | 22.05.2010

Young adults studying at Frankfurt-an-der-Oder's Viadrina University have turned a dull prefab tower block from the 1980s into their self-administered dream home – and thus saved it from demolition. 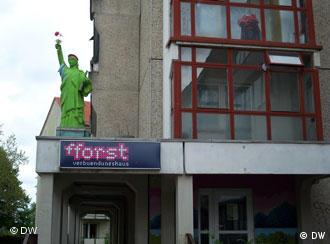 The students seek a maximum of liberty in their house

Among the rows of prefab tower blocks in an old East German residential area in the center of Frankfurt-an-der-Oder, one block stands out. Its external concrete slabs aren't any less gray than its neighbors, but the replica Statue of Liberty mounted above the entrance tells passers-by that its occupants must be of a special kind.

And indeed they are. The residents are an international group of students from the town's European Viadrina University, who have come together to create the Fforst community project. They hail from Germany, Poland, Portugal, France, Russia, Brazil and other nations. And they look after a self-administered block, which they took over from the local housing association. The association still owns the building, but has agreed to waive the rent.

"The room is full of different colors associated with the people who live here," said Mihal, a Polish student, presenting the block's club rooms in the basement. "Everybody in here wants to leave a mark that symbolizes something."

In the mid-2000s, students at the university attended a seminar on how to put empty residential buildings in the city near the Polish border to better use. Up to 6,000 apartments were left empty as thousands of locals left in pursuit of jobs elsewhere in the wake of German reunification. The students explored what it would take to get a whole apartment block under their control and turn it into a self-administered unit. Picture of harmony - Fforst students in their club room

A year later, they moved into such a multi-story building just to make a film about their idea. But then they never moved out, rescuing the building from its planned demolition - and so the Fforst house-sharing community was born.

Although negotiations with the WOWI housing company proved difficult at first, the deal struck in the end was that the students would pay for all utilities and would raise additional resources to organize cultural events for the whole town on a regular basis. And that's exactly what they've been doing.

"Everybody living here makes a contribution - often linked to the places they come from," says Tristan, a student from France. "We all try to make our house shine as much as we can."

Among other things, the group members have organized international cultural evenings focusing on their various home countries. But there have also been dance courses and parties as well as talks on important university-related subjects.

With the gift of hindsight, WOWI has now swung round to viewing Fforst as something extremely positive for the whole town. Frankfurt profits from the overwhelming media coverage the project has received. The publicity was so welcome that financial considerations were pushed into the background.

"Money isn't all that counts, and in this particular case it's definitely not about making sure that all costs are covered by the occupants," said Doris Kuehl, spokeswoman for WOWI. 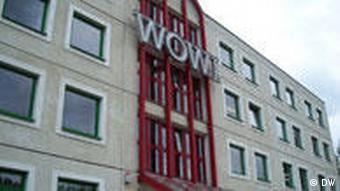 The WOWI housing association has not regretted its approval

The fact that living in the students' home is so affordable plays into the hands of the project's initiators, who also intended to create a place where neighboring German and Polish students could get to know each other better than they did on the university campus. Outside the house, rents on the German side of the border are too high for Polish students.

Consequently, one of the first rules the students set in their house was that roommates must be from different countries to foster bilateral and international understanding.

The occupants believe this concept has worked marvelously, and some have taken this idea even further and celebrated wedding parties in the house. Meanwhile, the Fforst home-sharing community has become a household name in town.

Smoking the peace pipe with neighbors

This is not to say that building good relations with everyone has always been plain sailing. Students tend to go to bed late, and sometimes they can get quite loud. Friction with neighbors seems inevitable, and indeed locals occasionally expressed resentment towards the new occupants, but now the buzzword is peaceful coexistence.

"We definitely look for compromises, and we invite the neighbors to our joint events," said Mihal from Poland. "Or we give them chocolates if we've been too loud."

Mihal adds that the creation of such a lively community should have symbolic value for a town that many are still leaving.

"We want to show that eastern Germans can stay in such a region and that it's up to them to change it for the better and turn it into an area worth living in," he told Deutsche Welle.

University students across Germany have hit the streets as part of ongoing protests against tuition fees and reforms to higher education. Rallies have been planned in most major German cities. (17.11.2009)