Actor, writer and activist Carrie Fisher has died after suffering a heart attack during a flight from London to Los Angeles. Fans and fellow stars have turned to social media to express their condolences.

Fisher's publicist, Simon Halls, made the announcement of her death on Tuesday, sending shockwaves through fans and Hollywood stars alike.

The family spokesman released a statement on behalf of Fisher’s daughter, Billie Lourd.

"It is with a very deep sadness that Billie Lourd confirms that her beloved mother Carrie Fisher passed away at 8:55 this morning," the statement read. 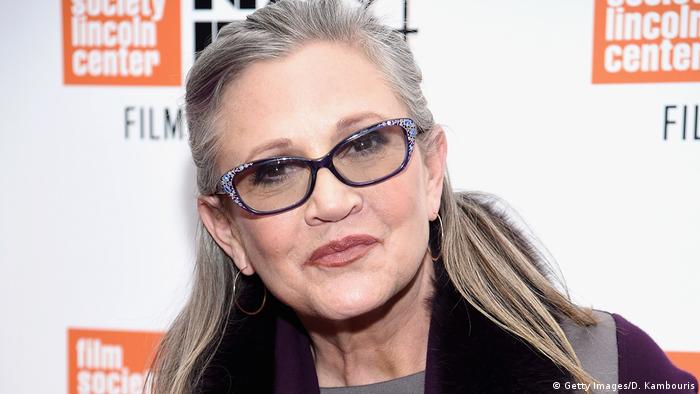 Fisher was being treated in UCLA Medical Center after suffering a heart attack on a transatlantic flight.

"She was loved by the world and she will be missed profoundly. Our entire family thanks you for your thoughts and prayers."

The 60-year-old Fisher was best known for playing the role of Princess Leia in the Star Wars franchise.

She was being treated in UCLA Medical Center after suffering a cardiac arrest on an 11-hour flight from London to Los Angeles on Friday. The actress was reportedly in London to film season three of the Amazon sitcom Catastrophe.

Tributes to the 'great and powerful princess'

Mark Hamill, who played Fisher's twin brother Luke Skywalker in the Star Wars franchise, said he had "no words" and was "devastated" by the news of her death.

The franchise's creator George Lucas said she was Star Wars' "great and powerful princess - feisty, wise and full of hope in a role that was more difficult than most people might think."

Carrie Fisher's half-sister Joely Fisher tweeted that her sister's death was an "unfathomable loss...the earth is off its axis today...how dare you take her away from us."

Actor Whoopi Goldberg said on Twitter that Fisher was "funnier and smarter than anyone had the right to be. Sail On Silver Girl."

Television talk show host Ellen DeGeneres posted a video of Fisher's appearance on her show on Twitter, saying that Fisher "was a brilliant writer, actor, and friend."

One heartbreaking tribute came from the Twitter account of the late actor's dog, Gary. "I was always by your side but best of all you were always by mine," a tweet from Gary's account read. Fisher's canine companion was never far from her side, accompanying her to movie premieres and television interviews.

Besides the Star Wars franchise, she played notable roles in Shampoo, The Blues Brothers, Hannah and Her Sisters, When Harry Met Sally, Family Guy and 30 Rock.

She was born in 1956 to actress Debbie Reynolds and singer Eddie Fisher. She is survived by her mother, daughter, brother and two half-sisters.

'I want it reported that I drowned in moonlight'

Fisher was known not only for her acting, but also for her witty writing and razor-sharp humor. In several best-selling books she wrote about her time as Princess Leia as well as her struggles with addiction and mental illness.

In her 2008 memoir "Wishful Drinking," Fisher recounted how George Lucas told her that she couldn't wear a bra under her white dress because "there's no underwear in space," explaining that a woman could be strangled by her bra in the weightlessness of space.

Fisher wrote that his explanation would make for a "fantastic obit," adding: "I tell my younger friends that no matter how I go, I want it reported that I drowned in moonlight, strangled by my own bra."

In her recent book, "The Princess Diarist," Fisher detailed the brief fling she had with Harrison Ford while filming Star Wars - at the time, Ford was 15 years older than Fisher and married.

When recently asked by NPR why she decided to publish the story now, she joked that she couldn't hold back any longer because Ford refused to die.

"I kept calling and saying, when are you going to die because I want to tell the story?" Fisher said. She was often toughest on herself, using her writing to turn the trauma of addiction and mental health into humor.

Actor Margaret Cho commented on what Fisher's death means to those battling mental health issues, writing on Twitter: "We just lost a great ally for mental health and addiction. Be strong, be as strong as she'd want you to be."