Parliamentarians in Iceland have paved the way for accession talks with the European Union. Iceland's government plans to launch its EU membership bid in Brussels before the end of this month. 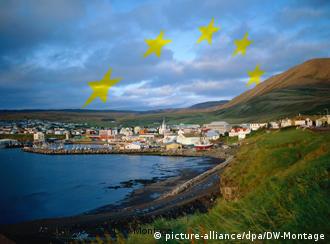 Iceland could become an EU member within three years

The Icelandic parliament, the Althingi, gave the green light for the government to bid for membership in the European Union, with 33 of the nation's 63 parliamentarians voting in favor of the proposal.

A total of 32 votes were required to pass the proposal, but opposition to the move was limited to 28 lawmakers, while another two abstained.

In the end, however, it will be the citizens of Iceland who will have the final word on whether the government pursues membership. If and when Iceland completes successful accession negotiations with the European Union, the question will then be put to the people in a referendum.

Divisions within the government 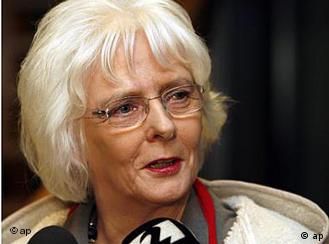 The governing coalition itself remained divided over the benefits of EU membership for Iceland – a country which is dramatically affected by the economic crisis.

While Sigurdardottir's Social Democrats have always campaigned for joining the bloc, their Left-Green coalition partners are traditionally opposed to the idea. Five members of the Left Green party therefore rejected the proposition, including Jon Bjarnason, the minister of agriculture and fisheries.

Other Left-Green deputies including Finance Minister Steingrimur Sigfusson, however, displayed political pragmatism by voting for the EU membership application along government lines.

"An overwhelming majority wants this EU issue to be dealt with," Sigfusson said.

One of the main EU pull factors for the large majority of Icelanders is the chance to drop the Icelandic krona as a currency. It shed nearly half its value in the wake of last year's financial crash, while inflation rose to over 12 percent. As a small island state with just 320.000 citizens, Iceland relies heavily on imports.

The strongest opposition to Iceland's EU membership comes from the fishing and agricultural industries. They are opposed to handing over the control over Iceland's lucrative fishing grounds to Brussels.

"We would no longer be the lawmakers on how we run our fishing industry. This is the key element for us. And we just don't see any need for an application when you know what the outcome is going to be," said Sigurdur Sverrisson from the Federation of Icelandic Fishing Vessel Owners (LIU).

If and how Iceland could keep the control over this vital part of the economy while having to join the – currently unsuccessful - common EU fisheries policy will be one of the most important and tricky questions during the accession talks. 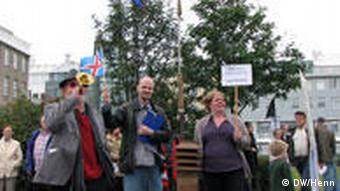 Eurosceptic protests in Reykjavik were low-key

According to the most recent figures, around 70 percent of Icelanders support the launch of EU accession talks. "I would like to talk and find out what we can get and what we'd have to give," is an often-heard comment on Reykjavik's streets these days.

The nation remains divided over the prospect of full membership in the bloc, however, with many citizens complaining about a lack of information.

Unlike Norway, Iceland has never applied to the EU because the majority of politicians were against it. "What we have seen in the last few months is a shift in political leadership rather than a great shift in the public opinion, although the public opinion for membership of course strengthened due to the economic crisis," concludes Adalsteinn Leifsson from Reykjavik University.

Iceland's Foreign Minister Össur Skarpedinsson, a leading Social Democrat, has already outlined an ambitious agenda for the accession procedures. Iceland plans to launch its application in time for the next meeting of the EU Foreign Ministers on July 27.

The fact that Iceland is already a member of the European Economic Area (EEA) and the border-free Schengen zone means accession talks are likely to be relatively short. Around two thirds of all Icelandic legislation is already in line with EU rules.

It is widely viewed as favorable for Iceland that another Nordic country, Sweden, currently holds the EU presidency. "We don't hide the fact that we want our friends to support us," said Skarpedinsson.

The Swedes support a speedy negotiation process with Iceland, and EU officials mentioned 2011 or 2012 as possible accession dates. A referendum will be held, meaning the Icelandic citizens will have the last say in the matter.

"Iceland has been dealt with in a very rough manner"

Iceland's economy suffered a near total collapse when its banks were laid low by the global credit crunch. The public lost their jobs and savings and now the government wants to know why. (06.07.2009)

Iceland named a new center-left government on Sunday headed by Johanna Sigurdardottir. She's promised to rebuild the nation's economy, which collapsed in the wake of the global financial crisis. (02.02.2009)

With a new interim government now installed in Iceland, the issue of EU membership has again come to the fore as the country struggles to turn around an economic meltdown. (02.02.2009)

Iceland and the European Union