Hungary’s conservative government has been criticized for handing out awards to a number of people who have expressed anti-Semitic sentiments. Several previous recipients have returned their awards in protest. 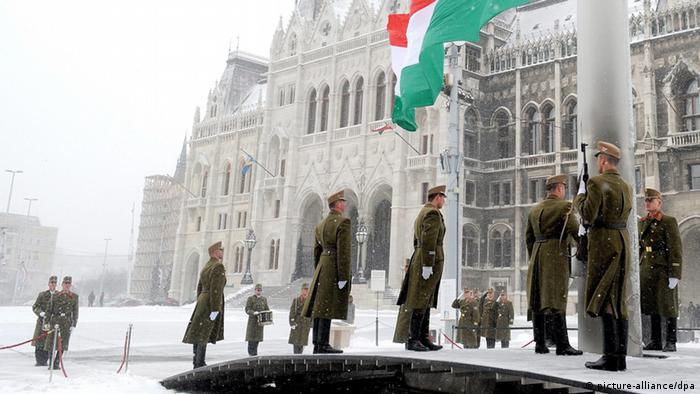 According to Hungarian media reports on Sunday, a television journalist, a rock musician and an archaeologist were among those received the Tancsics Prize - the highest honor the government can award.

In the past, the journalist, Ferenc Szaniszlo, is reported to have used television broadcasts to discuss anti-Semitic conspiracy theories. He is also reported to have compared members of Hungary's Roma minority to monkeys. In 2011, the country's media supervisory body reacted to those comment by fining the broadcaster Echo TV, which is close to Prime Minister Viktor Orban's Fidesz party.

The archaeologist Kornel Bakay, who is well known in Hungary for his anti-Semitic theories, also received the Tancsics Prize. His theories include one in which Jews organized the slave trade in the Middle Ages.

When Hungarian Prime Minister Viktor Orban visited Brussels, he had to deal with European criticism of his economic policies, but the EU keeps quiet about the country's lurch to the right. (30.01.2013)

Rock singer Janos Petras of the band Karpatia received the Golden Cross of Merit. Karpatia is regarded as the house band of the extreme-right Jobbik party. The lyrics of some of its songs call for an "unblemished nation" or the use of violence to extend Hungary's borders. It also took part in a march organized by the now banned paramilitary organization Hungarian Guard.

Zoltan Balog, the minister of human resources, whose ministry is responsible for handing out the Tancsics Prize, said he did not find out about the journalist's antic-Semitic remarks until after the decision was made. Adding that he didn't have the power to withdraw it, he described the decision to honor Szaniszlo in particular as "regrettable."

Some critics of Orban's government have accused it of using the awards to try to curry favor with the far right. The Jobbik party is currently polling at around 19 percent support. The prize was awarded on Friday, the country's national holiday.

At least 10 previous recipients of the Tancsics Award have handed theirs back in protest.