Hundreds of passengers and crew were evacuated from a ferry in the Baltic Sea after an explosion on board sparked a fire, according to German authorities. 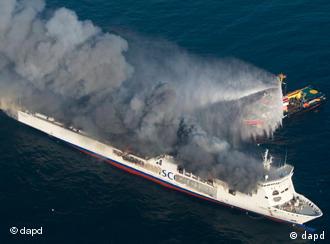 A Lithuanian ferry with more than 230 people on board has caught fire in the Baltic Sea after an explosion.

The passenger and car ferry Lisco Gloria was en route from the German city of Kiel to Klaipeda, Lithuania, when the explosion occurred on the upper deck around midnight.

The cause of the explosion remains unclear.

The fire reportedly spread quickly, but nearby ships, responding to a distress call, evacuated all passengers and crew safely.

Firefighters said the empty ferry was still burning the entire length of the ship on Saturday morning. The Danish ship Marie Milj, which specializes in environmental problems, is heading to the area to deal with any potential spill of the ship's diesel fuel.

"There are currently no indications at all that this could have been a terror attack," a spokesman for the German Central Command for Maritime Emergencies said Saturday. "Of course the police will investigate this further, but it seems to have been an accident."

With wildfires continuing to rage in Russia and the situation worsening in flood-hit Pakistan, the European Union is once again being criticized for its uncoordinated approach to international crisis management. (16.08.2010)

Fears have surfaced about the spread of radioactive material as Russian wildfires burn in areas contaminated by the 1986 Chernobyl nuclear disaster. But experts say there is no significant nuclear health danger. (12.08.2010)

One year after Cologne's city archive collapsed, the cause of the disaster is still unclear. Two people died and precious documents were lost. Mismanagement and a systemic lack of controls are being investigated. (03.03.2010)