With rebels claiming to have taken Goma, capital of North Kivu province in the Democratic Republic of Congo, tens of thousands have fled their homes and the UN is warning of a humanitarian catastrophe. 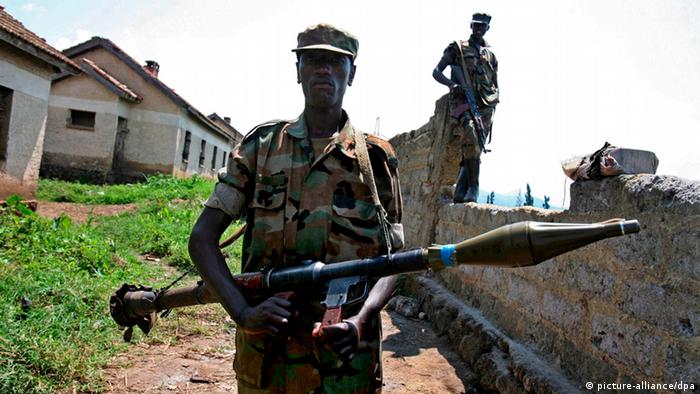 In North Kivu province, M23 rebels are advancing on the capital Goma and are engaged in heavy fighting with the DRC army, which is supported by UN troops from the MUNUSCO mission.

"We are getting information confirming that M23 rebels have captured Goma airport and are also expanding their positions around the building that is used by the parliament," he said.

Bin Fikira said people are worried and they fear there could be trouble once the rebels take control of Goma. "They fear that rebels could target those who are known to have worked for the government, or for the parliament and they believe they could be killed," he said. 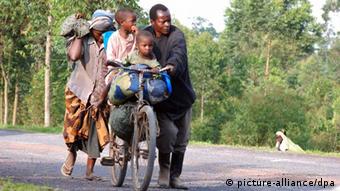 Refugees are fleeing Goma despite government appeals for calm

Colonel Vianney Kazarama, a spokesman for M23, told the Reuters news agency by telephone that despite attack helicopters and heavy weapons, "the FARDC (Congo national army) has let the town (Goma) fall into our hands."

The advance of the M23 rebels had already triggered panic among many of Goma's 400,000 inhabitants at the weekend. Tens of thousands of refugees who sought sanctuary in the refugee camp at Kanyarunchinya fled southwards in the direction of Mugunga to another camp.

Joseph Makundi is the civil protection coordinator for the provincial government in Goma. He told DW that a third of those who had fled had been given temporary accommodation in empty schools. "Many of them were too tired to make it to the refugee camp," he explained. Makundi says he is now receiving assistance from the Red Cross. "We are looking after children who fled without parents or elder relatives. We must also ensure that the refugees camps are stocked up with food and cooking utensils.

The Diakonisches Werk, a charity run by Germany's Protestant churches, is also preparing to offer assistance. One of their aid workers, Charley Mampasu, is in Goma. "We need to know exactly what the relief organisations in the city need mostly urgently," he said.

The provincial government of North Kivu is appealing to the population to stay calm. Governor Julien Paluku rushed to Goma on Sunday, telling DW "I have been able to reassure local inhabitants, explaining that the city is under the protection of the armed forces of the DRC, with the backing of UN troops."

However, such protection does not appear to be very effective. Even with helicopter gunships, they failed to halt the rebels' advance on Saturday, who were subsequently able to take the town of Kibuma.

The DRC accuses neighboring Rwanda of backing the rebels both financially and militarily. On Monday, Rwanda alleged that the UN backed forces had shelled its border town of Gisenyi, injuring three people.

The United Nations believes that a rebel attack on Goma would lead to a humanitarian catastrophe. "The situation is extremely worrying, tense and unpredicatable," a spokesman said.

Fresh fighting has broken out between rebel forces and the internationally-backed Congo military. The UN Security Council demanded an end to foreign support for the rebels, who are moving towards the city of Goma. (17.11.2012)

While international attention focuses on the M23 rebel group, other armed factions in eastern Congo have killed more than 264 people since April this year, a United Nations report has revealed. (16.11.2012)

Fighting between the army and the M23 rebels in the Democratic Republic of Congo resumed on Thursday ending a two-month ceasefire. This came a day after the UN and the US ordered sanctions against the rebels' leader. (15.11.2012)