More than half the people who need international aid end up having to find a way to live without it, the International Federation of the Red Cross and Red Crescent has said. The problem is not just a lack of funds. 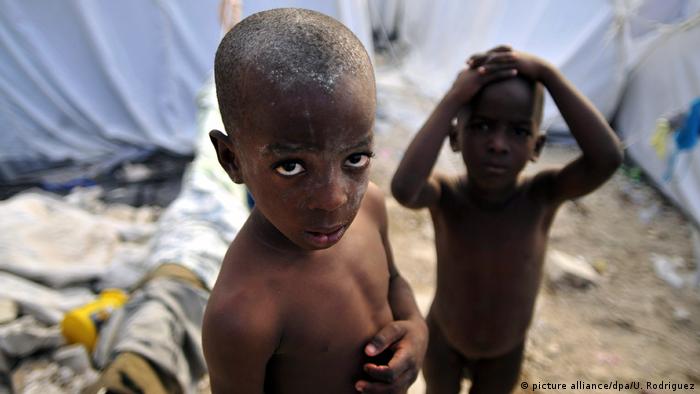 Millions of people living in crisis are being "left behind" by humanitarian aid organizations, the International Federation of the Red Cross and Red Crescent Societies (IFRC) announced on Wednesday in a new report on the state of global aid.

Some 134 million people will need humanitarian help this year, the IFRC said in its World Disasters Report 2018, citing the UN, but only 97 million would receive aid.

In 2017, "fewer than half of the people estimated to be in need were actually known to be reached by internationally supported humanitarian assistance."

The IFRC, the world's largest volunteer-based humanitarian network, said the failure to provide support to those in need was not just due to a lack of funds. Discrimination against minority groups, holes in government statistics, damaged or insufficient infrastructure, and conflict and violence were all reasons cited by the report as to why millions of people fail to receive needed aid.

"Even if all humanitarian appeals were fully funded, it is likely that many millions of people would still be left behind," said the IFRC secretary-general, Elhadj As Sy. "This report should shake the entire international humanitarian sector into actively seeking out those left desperate and hidden in the shadows."

The report also provided an overview of the types of disasters that have taken place over the past 10 years.

Between 2008 and 2017, there were 3,751 natural disasters, affecting some 2 billion people. Weather-related disasters accounted for the largest type of natural disaster at 84 percent, with floods as the most frequently occurring type. Other disasters include storms, heat waves, landslides, fires, volcanic eruptions and earthquakes.

Over 700,000 people died due to natural disasters over the past decade, with earthquakes causing roughly half the deaths.

While the World Disasters Report pointed out that the scope of international humanitarian aid has reached record levels, it simultaneously highlighted a "massive and growing gap between the funds required and the funds available."

In 2017, the UN was only able to cover just over half of its total spending calls, the IFRC wrote. "The data suggests that while aid levels may be reaching their peak, the level of need has not yet reached its peak," it warned.

In its recommendations, the report called for increased funding, including more equitable funding, and for donors to invest more in local responders, especially in developing their long-term crisis-response capabilities.

Increasing numbers of people depend on humanitarian aid due to natural disasters and political conflicts. Aid expert Martin Quack explains why more crisis prevention and a long-term development policy are needed. (17.08.2018)

Reports of investigations into flash floods which killed schoolchildren near the Dead Sea have been restricted. Previously, officials blamed the school for ignoring the bad weather. (27.10.2018)