Dr. Chil-Yong Kang, who heads a team of researchers at Western University in Canada, recently completed successful Phase I clinical trials on humans for a promising HIV vaccine. 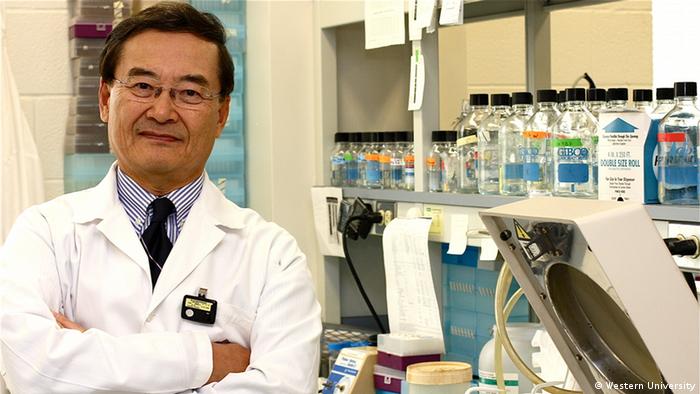 DW: The Phase I clinical trials for SAV001, the HIV vaccine you are working on, showed promise. How does the virus work?

Dr. Chil-Yong Kang: You can extract large amounts of a virus and then inactivate them, or kill them, and use that as a source of vaccine. That strategy works for the Salk vaccine for polio, rabies virus vaccine, flu virus vaccine, and Hepatitis A virus vaccines. No one in the AIDS research area used this strategy.

Do you happen to know why this wasn't tried before?

There were two problems associated with that. First, it's too dangerous to deal with the live HIV to make a vaccine. Second, HIV replications have not provided adequate quantities to make a vaccine with current technology. So we had to modify the virus in order to make a larger quantity and also not to make it too dangerous.

How did you go about modifying the virus?

Scientific research has identified a gene called the Nef gene, which is responsible for causing AIDS. If you take that gene from the AIDS virus, the virus can reproduce, but it doesn't cause AIDS. That has been demonstrated in the monkey AIDS virus, Simian Immunodeficiency Virus. The virus is isolated from HIV-infected individuals who did not develop AIDS. And those viruses isolated from those people show that there is a mutation in the Nef gene. So, we just delete that gene so it doesn't cause AIDS.

You have just been through Phase I clinical trials, which looked at the effect of the vaccine on people already infected by HIV. What's the next step in your trials?

Phase II will look at immune responses in humans, using HIV negative people, uninfected people, who are in high-risk groups; including injection drug users who share needles, female prostitutes, and men who have sex with men with multiple partners. We will recruit approximately 6,000 people. We will immunize 3,000 people and see whether they respond to this vaccine by getting antibodies and immune responses. And that will take about a year. And then after we finish that, we will go for the final test, which is the efficacy test to see how effective this vaccine is in preventing HIV infection in the same group of people. We'll see whether or not vaccinated people will have a lower rate of infection compared to the control group, or the other 3,000 people who will be vaccinated with a placebo.

If your trials are successful into the last Phase III stage, does that mean this will be a commercially available vaccine within a couple of years?

No, it will not be available in a couple of years because the efficacy test - the Phase III test - will take approximately three years. In order to have a commercially available vaccine for the high risk group of people, we are thinking about four to five years because, after we immunize these people, we have to observe them for natural infections for a period of three years. That's what the FDA [US Food and Drug Administration] requires.

There are some people who feel that an HIV/AIDS vaccine would actually encourage people to be more reckless, likely to have casual sex. What are your thoughts on that?

Eradicating HIV by vaccination is our big hope, but I don't believe that people will be reckless because they are immune to HIV infections. I think all kinds of sexually transmitted diseases have been with us down through human history. So I think our social behavior would remain the same.

Dr. Kang and his team are also working on a therapy that would help boost the immune system of people already infected with HIV. The therapy is expected to go into Phase I trials next year.

Scientists have traced the genetic line of a Salmonella strain that is proving especially deadly for AIDS patients in southern Africa. The findings represent an important step toward containing the bacteria. (30.11.2012)

Cow’s milk may not just be a valuable source of nutrients. A recent study in Australia also shows that milk could be used to develop an affordable cream or a gel to protect against the HIV virus. (30.11.2012)

Indian geckos are in high demand for HIV 'cures'

Tokay geckos are being caught and trafficked from northeastern Indian states to Southeast Asian countries, where many people believe that medicines made from gecko meat can cure diseases such as HIV. (24.10.2012)