How your conversations and phone calls impair your colleagues′ work performance | Science| In-depth reporting on science and technology | DW | 01.12.2016

How your conversations and phone calls impair your colleagues' work performance

Open plan offices are meant to improve interaction among co-workers. But researchers say they increase noise and stress above all else. Now a new study shows why open plan offices reduce concentration. 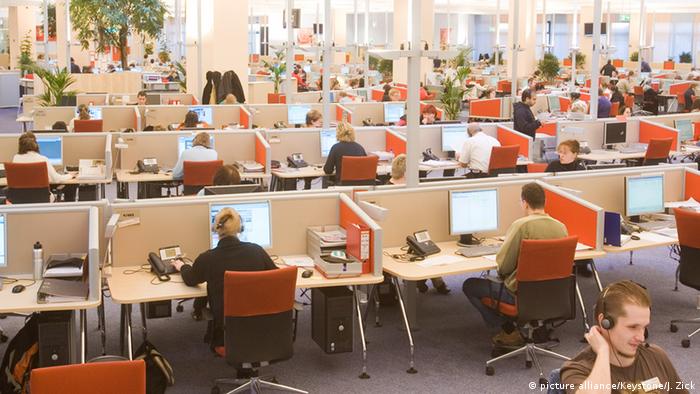 You may often wonder: Is it my fault that I can't concentrate in an office with colleagues around me constantly chatting and talking on the phone?

A new study shows that it's not.

Background noise keeps you from thinking - particularly if these background noises are work-related conversations within earshot, Japanese researchers say.

A team led by Takahiro Tamesue, an associate professor at Yamaguchi University in Japan, had volunteers completing visual and auditory attention tests while listening to either "real" speech or voice-noises without any meaning.

The volunteers performed worse when having to listen to speech compared to meaningless sounds.

Tamesue presents the results on Thursday (01.12.2016) at the Meeting of the Acoustical Society of America in Honolulu, Hawaii.

His study suggests it's not just the noise level that keeps people from concentrating. It's what people are saying.

A colleague's work-related conversation is more harmful to others' performance than noise coming in from the motorway outside  - even if it's at the same volume.

Tamesue and his colleagues measured volunteers' brain waves in an electroencephalograph (EEG) while checking their attention with computer tests. Two EEG signals - representing brain responses to a stimulus and selective attention - were much lower when the volunteers had to listen to speech while conducting the tasks.

The researchers say this is proof that the volunteers' selective attention and working memory were impaired. They also found that music had the same effect as conversation.

Flu and stress for everyone

Employers are keen on converting single offices into large open plan spaces in an effort to encourage interaction and collaboration among co-workers.

But earlier research has shown open plan offices may not be the best way to achieve that. For some, Tamesue's study represents just another nail in the partition.

"An open plan office is the most ideal place in the world to keep people from work," writes career coach, Martin Wehrle, on the German news website "Spiegel online." "Open plan offices have the same effect on work performance as an anteater on an anthill."

In 2000, psychologist Gary Evans at Cornell University in Ithaca, US, and his team found that employees in noisy open offices had higher concentrations of the stress hormone adrenalin in their urine. They were also less motivated to do their work.

And when in 2008, Vinesh Oommen and his colleagues at Queensland University in Australia screened all scientific literature regarding open offices, they concluded that employees "face a multitude of problems such as the loss of privacy, loss of identity, low work productivity, various health issues, overstimulation and low job satisfaction."